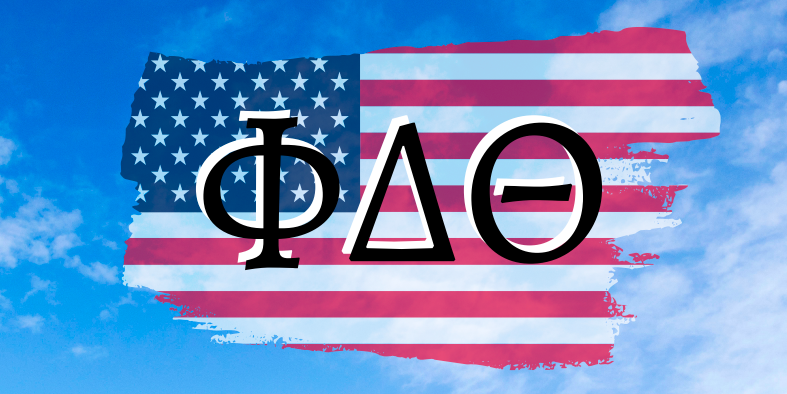 A few weeks ago, around 10 p.m. on a Saturday night, and my roommates and I were getting ready to go out and unwind after a long week of classes. A few friends and my girlfriend were visiting our apartment, and we all chatted about our plans before heading out for the night. I would ordinarily be going to the same party as the rest of the group, but on the night in question my roommates and their friends were planning on attending Phi Delta Theta’s annual “Let Freedom Ring” event, and my girlfriend and I elected not to join them. When they asked why, it took us some time to work out why we both felt deeply uneasy about the party.

Now, it’s important to note that I am writing this from a position of significant privilege as a white, cis-gendered, mostly able-bodied woman. It’s important to note because somehow, even with the mountains of entitlement that come with my position, when confronted with the idea of going to this party, I was— for lack of a better word— scared.

My personal qualms with the prospect of attending, especially with my girlfriend by my side, were rooted in my past growing up as a queer person in a small Texas town. If that experience taught me anything it was this: when a person is surrounded by like-minded people or finds themselves in a setting where their views are represented, vindicated, or celebrated, they can become emboldened in those beliefs. This goes for any belief or viewpoint. I, for instance, become more vocal and opinionated about issues when comfortably surrounded by allies. Likewise, when people who share a particular bias or prejudice gather together in a space that validates those ideas, it can strengthen their conviction.

In the past when I’ve visited the Phi Delta Theta house I’ve noticed that their gatherings tend to attract my more traditional, conservative peers. If we did choose to intrude upon that space as a queer, interracial couple, I was uncertain as to how those gathered would react. That night it was impossible to shake the feeling that this red, white and blue celebration of freedom just wasn’t meant for us.

Of course, anti-discrimination guidelines from both Southwestern University and the fraternity itself prohibit an event that explicitly excludes a particular group or groups. These guidelines, however, do not address the subtext of the party’s theme; any unforeseen conflicts that could arise at the event; or the “bias-related incident” that took place just last year at another party hosted by the same fraternity.

On top of my uncertainty about our bodily safety in that environment I was uneasy that, by attending, I would be implicitly supporting its message. It’s not that I have a problem with patriotism or love of country. In fact, I love my country enough to want it to change fundamentally for the better. What I do take issue with is the particular brand of American-ness being broadcasted by the theme and imagery attached to the “Let Freedom Ring” celebration. I would go so far as to say that a celebration of the United States that glorifies the current state of our union automatically ignores the millions of people within the U.S. who are not afforded these liberties.

This celebration exalting American excellence was taking place less than twenty miles from the detention center in Taylor, one of several facilities across the state where immigrants continue to be imprisoned without due process. Whether intentionally or not, this party was clearly holding a specifically high standard for freedom: a standard that doesn’t care about those who have historically been deprived by our great country of their voice, their autonomy, and their most basic human rights. When we celebrate an American ideal of freedom without acknowledging those who still don’t have it, we are implicitly saying that we have come far enough.

I want to make it clear that I am in no way saying that the fraternity should have been blocked from hosting this annual event. I merely want to raise the question of why they continue to put it on in the current socio political climate. What message are they sending, and to whom? It is not insignificant that Phi Delta Theta’s “Let Freedom Ring” was the first registered fraternity party of the new school year. Fraternities are some of the only options for nightlife in Georgetown, and they have considerable importance to the Southwestern community. This propagandist party, complete with its red, white and blue “Party Like A Patriot” bedsheet-banner, may very well have been some incoming student’s first impression of social life at Southwestern University.

Writing this, I realize that it may actually encourage more young men to join the fraternity since it can be a haven of non-political-correctness for anyone who find the more liberal students irritating. I just hope those who do join this fraternity take a moment to think about why someone might feel unsafe in their house, or among their brothers, and what they can do to change that. I am also fully aware that anyone speaking in the fraternity’s defense will dismiss my opinion as yet another example of over-sensitivity, or another attempt by the left to chip away at traditional American ideals, and to them I say… well, you might be right. If the traditional American ideal includes celebrating the liberty of some but not all, we need to redefine that ideal.

The reason for our “America” themed event was simply that we decided on having a party five days before Saturday, August 31st. We wanted to have a theme that was easy for people to dress for, didn’t require a ton of planning, and would allow us to use decorations we already had in the house. The party didn’t even have an official name, like our Toga or Mardi Gras parties; we used stock imagery and took a lyric from a popular American song “My Country ‘Tis of Thee” as a tag-line for our social media promotion. There was no other motive besides us trying to put on a fun, simple, and most importantly, safe, event for the students of Southwestern to enjoy. That being said, if any student has any questions or concerns, I’d be happy to answer them, please do not hesitate to reach out!