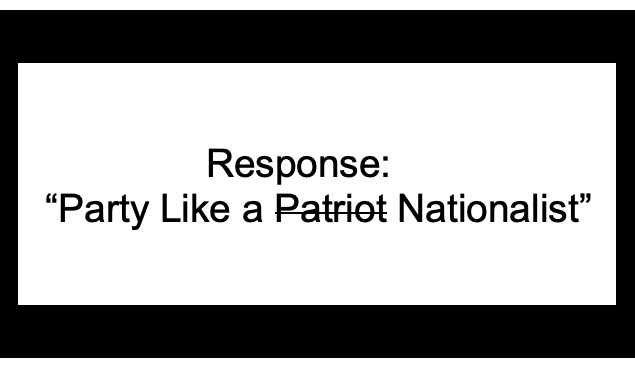 A few weeks ago, around 5 p.m on a Tuesday evening, I was with my friends returning from Sonic as we wanted to decompress prior to doing homework later in the day. Upon our arrival, it was brought to our attention that an article in the Megaphone, “Party Like A Nationalist” was making its way through ‘Mouthwestern.’

The article was written by an anonymous Southwestern student who addressed her concern with Phi Delta Theta’s party, “Let Freedom Ring”, and the message it could have potentially been broadcasting. The author discusses her qualms with Phi Delta Theta’s theme given the current state of our country’s “socio-political climate.”

Now that you’ve been briefed, I ask the reader to hear my rebuttal to the anonymous author and address some of the larger issues that are present on this campus.

The author makes many points, one of which is the political climate on campus which reflects today’s current divide amongst parties. We all study at a liberal arts university, one that teaches us to expand our knowledge on issues, step out of our comfort zone and to continually question. All of which are skills I believe are imperative in guiding one to becoming the best version of oneself.

I think the hypocrisy that some feel on the opposing side of the political spectrum is that people label themselves as accepting yet reject anyone who may disagree politically.

Phi Delta Theta was labeled by the author as a conservative and anti-LGBTQ+ environment due to the “bias-related incident” that occurred last year. Personally, I find it problematic that, not only this author, but the culture on campus allows a group of people to be labeled as anti-LGBTQ+ based on a single incident.

I am not minimizing the magnitude of that event but only simply stating: it is unfair to label these men similar to the perpetrator.

The additional assumption made is that these men are intolerant to the LGBTQ+ community due to their political views. As a gay, moderate man this concerns me. The usage of identity politics is an incredible issue, especially when society cannot separate an individual from former political ideology or stereotypes. The damage has been done but this gets into a larger issue that all fraternities seem to deal with called ‘cancel culture.’

As time has passed, all fraternities have yet to break their stigma. What’s the first thing that comes to mind when a fraternity is referenced? Most would say that Kappa Sigma is “the gay frat,” Phi full of trump supporters, Pike has “creeps” and KA is “proud of their history.”

The problem I have with this is that most of the issues or labels are based on isolated incidents or specific individuals. These narratives that are spread cause nothing more than greater division amongst us.

Criticism of fraternities is definitely welcomed and suggested to better ensure that they follow boundaries, however, to simply accept a narrative as fact about a fraternity is unfair to its members and reputation.

As I close, I’d like to mention that I am not a Phi Delta Theta member, or an individual that knows a brother on a personal level. I simply believe that the opposing side of this story should be broadcasted, and that individuals who may not be within the political majority should be heard.

Tags
Previous Article
Opinion: Party Like A Nationalist
Next Article
Poem: Our Mother, Our Martyr