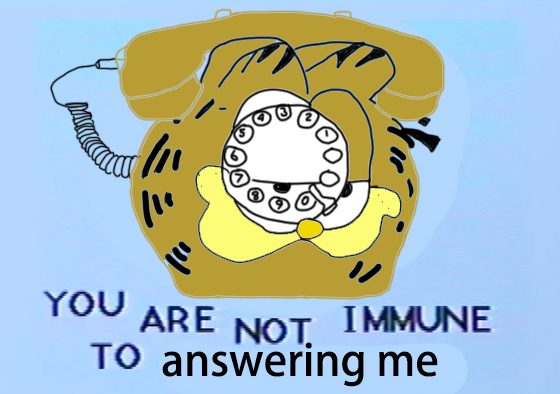 If we were to imagine going to the beaches of France, sitting along the shoreline, embracing the sun. Perhaps then, you would also hear me—also with you in France; because you just so happen to be imagining the exact same beach which I am depicting. As it was, our imaginary beach encounter would begin with a yell. Faintly at first, you’d hear me, “Ow!” with an utter exclamation. Trying to enjoy some rest, you may put my scream to the back of your mind, but perhaps you’d then once again, hear a loud and furrocious yelp from me, “Ow!”. Why would I be making such unsettling sounds? Maybe because there are pieces of Garfield phones that have been washing up on beaches throughout France for the past 35 years.

Official sources claim they know the root of this enigmatic mystery, and this section will explore the impact that the discovery has had on students at Southwestern University, and we hope that you consider: what impact could this have on you? There could be no better way to start this manufacturer’s incidental shipping fiasco, then to quote a source that claims to have solved this elusive conundrum.

Time magazine said, “a farmer got in touch with the organization to say that he discovered that a metal shipping container with a massive stash of the orange Garfield telephone cargo was tucked away in the deepest recesses of a cave after a storm back in the ’80s.”

As an environmentalist, I am hopeful that cleaning up the phones as they wash up on the shores is carried out purrfectly. As a Garfield fan, I was devastated to see that such a neat consumer product was lost to the sea, thereby also ruining the environment where people could spend a pleasant day fishing. A quote from a pirate buddy of mine once said, ‘one fishes and wishes and fishes some more, until one day their sailor’s dreams finally endure.’ For me I’d imagine that happening on a beach in France, wishing to fish a bass heavier than the perch I’d set on the line, I’d jolt excitedly as I reel in a Garfield phone.

I was given the opportunity to discuss this subject with a few anonymous colleagues. Through my encounters, I received feedback along the lines of:

“Are you joking?” Another humoured by the report asked, “One only wonders whether they came for lasagna style quiches, or to let you know of an investment opportunity involving a timeshare in the arctic area of Argentina—in which case it’s probably best to just wait it out, so that the call is forwarded to voicemail.“

As well as a member of our editorial staff who said, “ever since finding out about these Garfield phones, I’ve longed to have one on my bedside table. Ya know, to make calls.”

That’s the article. Now you know where the Garfield Phones that have been washing up on beaches in France are from, and the opinions of members of the Southwestern community. We hope that you take a moment out of your day, to reflect alongside colleagues about what this discovery means to you.

Tags
Previous Article
A Party 110 Years in the Making
Next Article
Opinion: The very real fear of authorities when it comes to sexual harassment