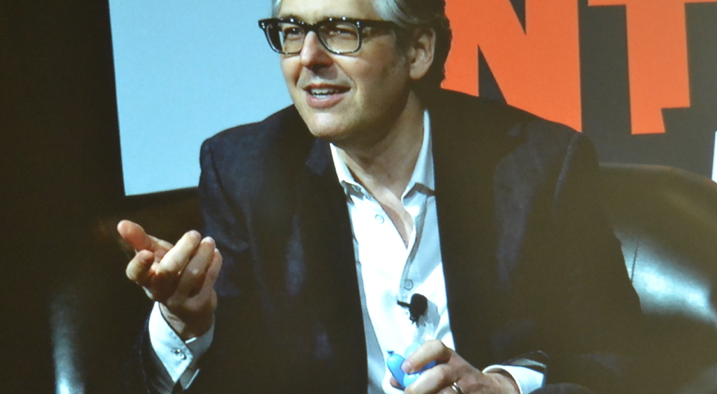 He accompanies millions of people per week on long commutes, runs, and just about anywhere anytime anyone wants to listen. Ira Glass is hugely influential as a public radio personality whose acclaimed radio show This American Life (TAL) is in its’ 20th year.

Glass wears many hats—journalist, film and radio producer, editor, businessman—but, foremost, he is a creative genius and storyteller.

Glass certainly knows about getting to an idea while it is fresh and doing it well. Serial, a spinoff of TAL, was a smash hit with over 8 million people downloading each episode. For Glass and the staff at TAL, creating the show was a matter of asking the question, what is the biggest cultural trend at the moment?

“It’s television shows we binge watch,” Glass said. “[We asked] how can we do that with reporting?”

The result was Serial, an investigative narrative telling the story of a murder in Baltimore in 1999. The podcast told the story over an entire season of twelve episodes and was markedly different from what anyone else was doing.

Business, Glass said, is the simple part of the equation. Creative work on the other hand is frustrating and uncertain, but the key is making something you would also consume.

“We’re making what we think we would like to hear on radio,” Glass said. “I feel like nobody talks about the golden rule when it comes to media—don’t make anything that you yourself wouldn’t consume. That’s God’s law. If you’re not doing that, take a look in the mirror with what you’re doing with your life.”

During the question portion interview of the presentation, confirmation of Glass living his life right came when he pulled balloon animal supplies out of his backpack and assembled one for a questioner.