While walking around freshman orientation wearing a lanyard might equal social suicide, at SXSW, lanyards are a badge of pride worn by more than 72,000 attendees.

This is not the only part of SXSW that works a little differently than life outside the festival. It’s the place where VR headsets are worn around necks as casually as scarves and hundreds of people are on their phones, laptops and tablets during presentations without hesitation. It was evident the crowd was more technologically advanced than the average person when, amazingly, not a single ringer sounded during any of the dozen presentations I attended.

SXSW is Disney World for techies, entrepreneurs and creatives with all of the great entertainment and elaborate displays without Mickey Mouse. Here are my top five moments from the 2016 Interactive Festival:

Silent Room by Dutch London-based artist Simon Heijdens is a room engineered to remove all visual and audible sensation. I first heard about this concept years ago when an article about the quietest place on earth, an anechoic chamber at Orfield Laboratories in Minnesota, went viral. The poster outside stated, “A 40’ long acoustically engineered building that visitors enter and walk through alone, excluded from any other visual or audible manifestations but themselves; a rare, completely unmeditated state. Eventually, as ears and senses adapt, in the monochrome silence the visitor becomes the sound.” The attendant outside the exhibit confirmed the rumor of the longest a person being able to stand it was 45 minutes and added that people who stay in for a significant amount of time experience hallucinations. Perhaps for this reason, or perhaps because of the line snaking down the block, participants were limited to one minute at the SXSW exhibit. For me, the experience did not live up to the hype and intrigue, though listening to myself chew gum in a place devoid of other sounds might have caused me to develop misophonia.

The Trade Show highlights the creative work of both promising startups and industry leaders. This was a great home base during the festival and every time I entered over the four days, new and interesting things were happening including a NASA astronaut signing pictures, 3D printed pizza, and a place where you could be turned into a hologram. Doing VR for the first time was a definite highlight and I felt like Bryant Gumbel, Katie Couric and Elizabeth Vargas from the 1994 Today Show clip “What is internet?” as I questioned people exactly on what it was and how it worked. I can imagine my eventual children howling with laughter as they read about my first VR experience. As I watched other being coached (“Make sure to look around… Okay look around that’s how it works… Really you need to look around”), I felt better. This, is apparently, what storytelling is coming to and even though right now it looks like someone is neruotically looking for where a noise is coming from with an iPhone strapped to their face, I really am excited for the future.

Technology has enabled many dreams of science fiction and fantasy with portable computers and self-driving cars. Ben Aldred and Thomas Engebrand of “This Places” have made mind control a tangible possibility with their app MindRDR. The app uses Google glass and an EEG headset for a mind-controlled interface. The device is not implanted in the brain nor has the ability to read thoughts, which can be either a disappointment or a major relief depending on how you felt about Inception. The app can pick up on the impulses fired by the brain and turn it into data. While using the device, a user can concentrate for a few seconds and take a picture using brain power alone. Though the concept seems simple enough, Aldred and Engebrand said this was not the case and users generally require coaching and practice to learn how to use it. The concentration techniques developed using this technology can be helpful in meditation and mindfulness practices. With civic engagement as the Breakout Trend of the Event, it is unsurprising Aldred and Engebrand discussed their interest in the social aspect of the technology. Regarding future applications of the app and device, they discussed the potential it has to restore functions of the body to people who have lost limbs through natural thought and assist people with physical or verbal limitations who might have a difficult time interacting with digital devices. It won’t be long until we won’t have to lift a finger or say a word to interact with the digital world.

The Confidence Game: The Power (and Price) of Stories

Telling stories is a craft as ancient as human history but only in recent years has storytelling become a movement. New York Times bestselling author Maria Konnikova gave insight into the power of stories and the ability of a story as a tool of persuasion and deception with her research on con artists. The common theme between the people who pull off great heists and large scale acts of deception? They are great storytellers who are intuitive enough to realize the tendency people have to gravitate to the best narrative and best story. “The fundamental thing that makes stories so powerful is that we want hope and meaning,” said Konnikova. “Stories are the promise that tomorrow will be better than today.” The key to getting people to listen and buy your story is to get them emotionally invested. Sob stories cannot be questioned the way others narratives can be, which is something con artists integrate into their approach. The deception used by storytellers can often come to good ends, like the Cambodian anti-trafficking advocate Somaly Mam who fabricated stories of abuse in her campaigns yet helped thousands of women with the money she raised. The way to understand this gray area might be unanswerable, though it is important to accept that we will believe stories and we can take action through trusting but also verifying information. This presentation had an appropriately Austin ending when a person asked the question, “How does Lance Armstrong fit into your research?”

Why Happiness Is Hard and How to Make It Easier

With a resume including Buddhist monk, degreed in Circus Arts, and founder of Headspace, Andy Puddicombe can add the impressive bullet point “led meditation for hundreds of digitally obsessed people in a single room” after SXSW. Puddicombe talked about an immediate, though ignored, problem about the increasing decline in the health of the mind in the digital age. In the world of increasing connection, many people feel increasingly disconnected, isolated and alone. As a result, they look for happiness outside of themselves. “We’re always looking for the future and some place else,” Puddicombe said. “Look, I gave up my university degree and went off to the other side of the world thinking that if I could just reach that mythical monastery on the mountain top, if I could just slip into a maroon number and ring a few bells and burn a little incense, then I’d be happy. So you can imagine my surprise and my shock when I got there and I realized my mind had followed me.” Mindfulness, the ability to be present in the moment, and meditation, a bridge to contentment, are answers in how to escape the feeling of disconnection. The best news was Puddicombe assured us we don’t need to give up our phone and digital life to find this balance—we just need to find a way to relate to technology that allows us to maintain peace of mind.

SXSW gets bigger and better every year and this festival was no exception. Right now, it’s hard to imagine how this will be possible next year, but it will happen.

One last note on the lanyards and SXSW protip: the License Plate game can easily be adapted to SXSW by looking at fellow attendees’ lanyards to see where they come from and, as an added bonus, where they work. You’ll discover you’re brushing elbows with people all over the world, such as Australia, Brazil, Japan, Amazon and BuzzFeed to name a few. 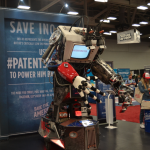 The Trade Show at SXSW housed the up and comers and established industry leaders. 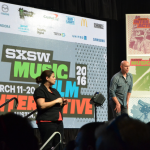 Andy Puddicombe leads meditation for the masses at SXSW. 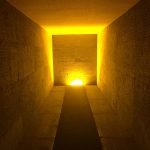 Inside Silent Room by Simon Heijdens 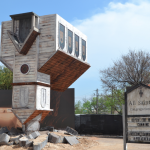 AMC celebrates the premiere of its new series “Preacher” with this exhibit.

Tags
Previous Article
Glass Wears Hat of Interviewee, Balloon Modeller at SXSW
Next Article
Who Are Pirates for Pride?