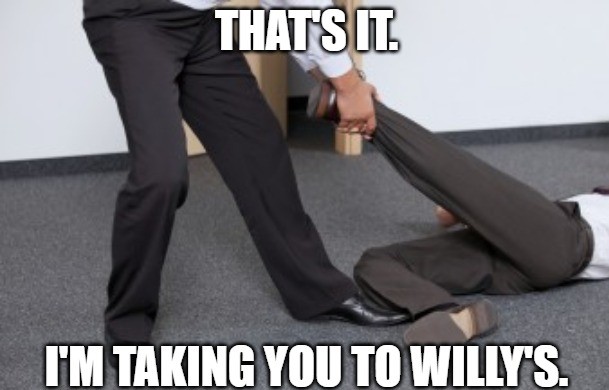 We did it! We finally have a competent animatronic horror film! Willy’s Wonderland, released on February 12th, 2021. Directed by Kevin Lewis and written by G.O. Parsons, Willy’s Wonderland stars Nicholas Cage as a janitor who has to clean up an abandoned “Chuck-e-Cheese” Esque establishment overnight as payment for getting his car fixed. Inside Willy’s Wonderland wait for eight animatronics including Gus Gorilla, Siren Sara, Tito Turtle, and of course, Willy Weasel. The night quickly turns from cleaning to surviving as Cage faces off the animatronics one by one.

Before I can continue, we need to discuss the Fazbear in the room. Yes, this movie has a striking similarity to the video game series Five Nights at Freddy’s (FNAF), where the player has to fend off of animatronics for, you guessed it, five nights. In fact, FNAF was meant to have a movie out years ago with Warner Bros. Studioshowever, Scott Cawthon, the creator of the series, was having too much trouble agreeing with executives on a script. Warner Bros. later dropped the FNAF film and released their own animatronic nightmare, The Banana Splits Movie in 2019. Currently, Blumhouse Productions have the movie rights to FNAF, and a film should be releasing sometime in the next five years. Willy’s Wonderland may have killer mascots, serial killers, and possessed animatronics, but that’s where the similarities end. Willy’s Wonderland is very much its own thing, and I recommend those fans of the FNAF series to give it a chance.

I’ve waited almost a year for this film to come out. I love horror movies, especially those with a distinct charm to them. Willy’s Wonderland NAILED the set and character designs, with the inside of the place looked exactly like my local “Chuck-e-Cheese”, bringing up old childhood fears. The animatronics in this movie are PERFECT. Even if you don’t care to watch this movie in its entirety, it is definitely worth it to look up the animatronics themselves. A mix of robotics, puppeteers, and actors in costumes was used to make these creatures look as authentic as possible. You can tell that everyone who worked on this movie was passionate about it – including Cage. Cage’s character does not speak at all in this film, but he’s absolutely the highlight. There will be times where you’re laughing at his choices or hyping him up as he takes on a gorilla in a bathroom. If this movie was just Cage fighting animatronics, I would give this movie a 10/10. Unfortunately, there’s a plot.

The plot isn’t bad by any means. It’s an ok plot and the lore of the closed-down Willy’s Wonderland is good and well developed. You will find some similarities to FNAF, but as I said before, it doesn’t feel like a carbon copy of the video game series rather than something new entirely. Like the majority of horror movies, this one needed teenagers to kill. The teenager group in this movie is alright but that’s all I can say: they’re just alright. While I enjoyed some of their dialogue, I just wanted to fast forward all their scenes to get back to Cage. That being said I will say I enjoyed the fights and kills in this film. Because the directors and set designers wanted to use as little CGI as possible, the gore and blood were pretty solid.  Should you check out Willy’s Wonderland? YES! It’s a fun time that makes you feel nostalgic for the old “Chuck-e-Cheese” and “Peter Piper Pizza” days. Should you rent it for $20? No. I was willing to splurge that much for an 80-minute movie because I was in love with the whole project since it was announced. Unless you feel the same way, I recommend waiting a few months for the price to knockdown. Wait around the Halloween season, when the time and price are right. Willy and his friends can’t wait to see you at Willy’s Wonderland!

Previous Article
Diana Prince’s Character Assassination in WW84
Next Article
Demon Slayer: Recap of what you missed before season 2