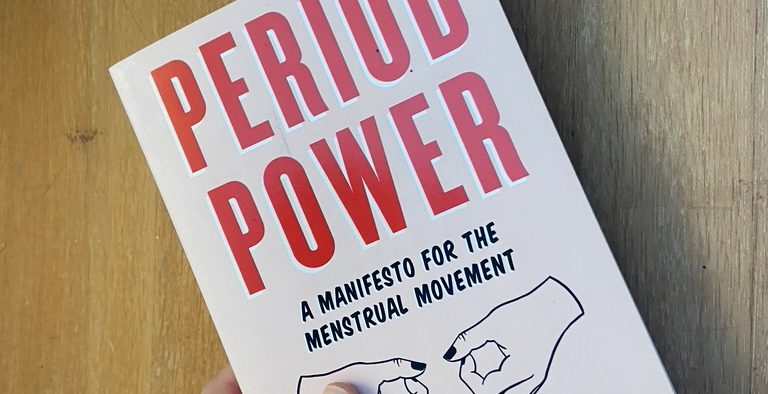 As I finished unbagging my groceries it hit me: I forgot tampons. I called the SU bookstore and there’s a man at the other end of the phone. He said they were in stock, but that the bookstore closed in five minutes. Sprinting down the stairwell I felt as though I was in a PlayTex commercial. I was holding the contents of my lanyard as I ran towards the commons, hoping like hell that I wouldn’t spray mace on my athleisure. I gasped for air through my mask as I skipped up the three flights of stairs, and entered the bookstore panting. The clock showed one minute before closing, I exhaustedly grabbed tampons and swiped my pirate card. Then the question hit me: “I wonder what accessing tampons is like for the underprivileged? For those who face greater obstacles than three flights of stairs, and five minutes till closing?”

While researching, I discovered that there is an extra tax put on women’s clothing, female targeted personal care items, and period hygiene items. Women not only get paid less than men, they pay more in taxes too! According to the Huffington Post, the “Pink Tax” causes women to pay $1,300 a year more in tax. Through reading Nadya Okamoto’s book Period Power, I learned many more jaw dropping facts. As of 2015, fifteen states taxed tampons as a “luxury” item, meanwhile candy and soda were considered necessities and had no tax added to them. When I’m standing in the check out line I’m not asking myself if I really need tampons… I’m asking myself if I really need a chocolate bar. But the two things are normally purchased in tandem– let’s be real here.

Period Power also taught me that there is a lack of access to period products among those who live off of food stamps, and who live below the poverty line. In fact, many people on food stamps have reported selling their stamps in order to buy tampons. The classification of tampons as a luxury item along with the pink tax affects a lot of people. The 2017 U.S. Census found 1 in 8 people in the United States live in poverty. That’s a lot of people. A Reuter’s Health Study of low income women found that ⅔ of them couldn’t afford period products at some point in the previous year. Even more maddening: one in five of these women said that this was the case every month.

For a lot of us, period products aren’t even something we think about. It’s just something we toss in the grocery cart, swipe a card for, and forget about until the next month. This is not the case for many people. Period products are hard to come by for those who are incarcerated. In the prison system, period hygiene items are used as a method of control. Guards often withhold supplies as a way of humiliating those who are menstruating. An article in the New York Times said correctional officers often throw tampons in the air and make inmates dive to the ground to get them. This extremely traumatic, prisoners’ basic human rights are being compromised to entertain some guards. A report published by the American Civil Liberties Union said that thirty-eight states have no law requiring prisons to give menstrual products to inmates. Kimberly Haven, the author of this report, spent time in prison and had to have a hysterectomy due the unsanitary homemade products she used. A 2018 report by Texas Criminal Justice Coalition revealed that more than half of (formerly incarcerated) women who participated in their survey did not have reliable access to period products while in jail. Unfortunately, I have not been able to find a single charity organization currently operating that provides those in prison with menstrual hygiene products.

If you subscribe to tampon company Lola right now, they’ll donate a box of pads to a teen in need: https://www.mylola.com/

Previous Article
Being a First Year During Covid
Next Article
“Don’t Try to Understand it. Feel it.” Well, I Feel that I Don’t Understand It