The Gentlemen: Full of Stars, Yet Lacking Sparkle

The Gentlemen: Full of Stars, Yet Lacking Sparkle 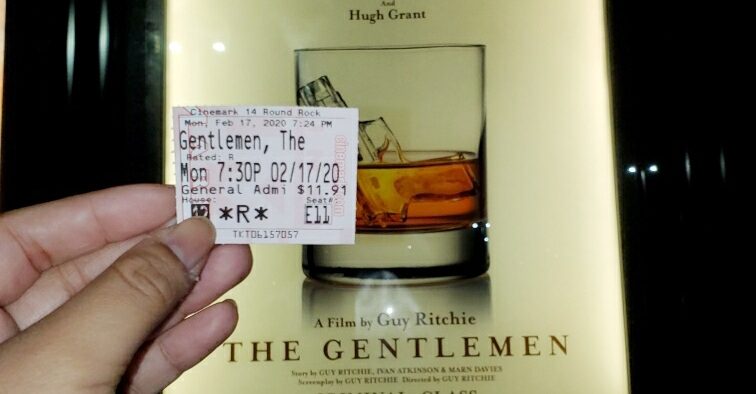 The Gentlemen is not unlike a luxury train wreck; it’s filled with rich British people, stretching out longer than you think is possible, and painful to witness. Guy Ritchie’s new action movie is a far cry from his previous forays into the genre. Despite boasting a cast with considerable cultural cachet, The Gentlemen is predictable, unimaginative, and disgracefully derivative. It bears a passing resemblance to Kingsman and Dazed and Confused, in that it is also heavy on white men taking drugs and beating each other up in inventive ways, but has none of the qualities that made those movies remotely palatable. Even if you were a fan of Ritchie’s other fare—which I am, though now feel ashamed to associate myself with his brand—The Gentlemen probably isn’t for you. Frankly, I’m not sure it was made for anyone other than Ritchie’s ego.

The Gentlemen is about a drug lord named Mickey Pearson, an American transplant to England played with a lot of confidence—but not much finesse—by Matthew McConnaughey. Ritchie requires you to suspend your disbelief right from the jump by pairing McConnaughey with Michelle Dockery as Rosalind Pearson; it is more than a little difficult to imagine that the patrician and composed Dockery would really fall for McConnaughey’s classless, avaricious kingpin. Ritchie was gifted with the opportunity to put Dockery back into fine English dining rooms, mingling with the upper class for the first time since Downton Abbey. Her posh inclinations are tempered with a Cockney accent that she pulls off with admirable grace.

In contrast to Dockery’s skill, Pearson’s antagonist and competitor is played by Jeremy Strong with all the verve of a three day old trout on a slab of ice at a fish market—glassy-eyed, lifeless, and singularly unappealing. I remain thoroughly unconvinced that his wooden acting was intentional; no one in their right mind who was desirous of a career with some sort of longevity would make such a choice. Henry Golding is a secondary opponent as Dry Eye, a rival drug dealer, whom he plays as deadly, and yet inexperienced—a newly forged knife not yet honed to optimal sharpness, though nonetheless prepared to cut.

As for the rest of the cast, Charlie Hunnam gives a decent performance as Pearson’s henchman, Ray, seemingly displaced from the set of a Kingsman sequel with his blonde hair and tortoiseshell glasses. Hunnam holds his own in scenes with actors far more well-known than he. And paired for much of the film with Hunnam is Hugh Grant as Fletcher, a sleazy tabloid journalist as far from Grant’s natural polished charms as possible. He executes it convincingly, but that does not make it enjoyable to watch. That Ritchie has such a talented cast makes his own authorial failures all the more glaring. He was given everything to work with, and yet somehow managed to produce nothing.

The Gentlemen shows Ritchie’s technical skill with excellent cinematography, a varied mise-en-scene, and a luxurious color palette. He pays close attention to symmetry when staging his set, which is commendable. However, screenwriting is not his forte; he tells the story through a frame narrative, which he really should have left to someone who could execute it with more talent, like Wes Anderson. The non-linear, layered storyline is far less complex than he thinks it is, and yet somehow simultaneously Byzantine. It is both forgettable and confusing, which is, in and of itself, a triumph of inadequacy. And when he can’t think of something remotely amusing to say—which is often—he defaults to the foulest gendered slurs, which is only the first of many places in which The Gentlemen’s biased agenda seeps through.

The worst part of The Gentlemen is something far more unrefined than its title suggests: quite a heavy helping of prejudice. Golding’s Dry Eye is subjected to more than a few racial epithets, and Fletcher mocks his accent and skin tone repeatedly in several jarring scenes. Despite all of this, Golding delivers what is frankly a far more compelling performance than Grant in this film. After the careful framing of Dry Eye as incompetent not because of his criminal inexperience, but because of his race, he forces himself on Rosalind Pearson in an attempted rape. This distasteful, unnecessary act is a double-edged sword; it both turns Rosalind into a damsel to be rescued, and morphs Dry Eye into a heavily racialized, sexually aggressive “Other”. Worst of all, it positions a white man—Mickey Pearson, of course—as the savior of a supposedly helpless woman and the rightful castigator of a man of color.

Adding to the twisted morals of the distinctly ungentlemanly Gentlemen, Pearson’s drug empire props up the palatial estates of the white bourgeoisie across England. Yet when in an argument with Dry Eye’s father, Lord George, Pearson chastises the other man for selling heroin instead of marijuana. On a rather high horse for a criminal, Pearson soliloquizes about the dangers of heroin, which once again creates a rather uncomfortable dynamic, with a white man paternalistically lecturing an Asian man on legality and ethics while he continues to break the law with impunity. It turns people of color into villainous foils against which Pearson can define himself as a criminal with a conscience.

This may have been unintentional, since none of this film seems to be planned particularly well, but it is nonetheless short-sighted. Pearson—and thus, Ritchie—forgets that young black and brown people routinely waste away in prison for being caught with far less marijuana than he sells in the film with such liberty; his drug of choice is deadlier than he thinks. It is tone-deaf, multilayered in its myopia, and thoroughly out of place in 2020.

What Ritchie seems to forget is that it is entirely possible to make an action movie without any of the prejudiced doggerel that he pushes in his trite script, and we know that because Ritchie has actually done it before himself. His 2015 The Man From U.N.C.L.E. is a clever, artfully composed movie with a sense of humor, incredible cinematography, and dynamic characters. Yet in the ensuing five years, Ritchie regressed to the sort of action that feels hollow and dull. It is disappointing, and worst of all, it is mediocre work from a director who once proved himself capable of excellence. If you have a hunger for action, you’re better off seeing Birds of Prey. Support films at the box office that are actually trying to tell new stories from new perspectives—or that are, at the very least, trying at all.

Tags
Previous Article
Gretel and Hansel is a Fairytale, but not in a Good Way
Next Article
EBONY Presents: Black History Talent Showcase at KMB