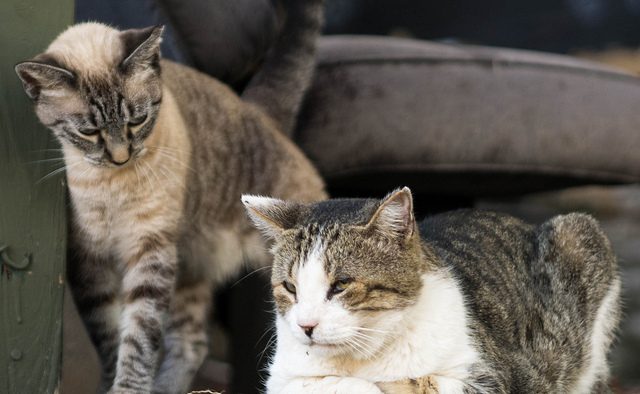 On September 26, one of the feral cats, Madeline, at Southwestern University was killed by an anonymous student’s dog. Around 5:15 that evening, Madeline was on the porch at Korouva Milk Bar when the dog, who was off-leash, tried to play with her. It quickly turned aggressive, and the dog grabbed Madeline and took her to the lacrosse field. She was taken to a veterinary hospital, but died on the drive over.

Students were inside Korouva Milk Bar, getting ready for a club meeting, when the incident occurred. They heard yelling from outside, but assumed it was from the lacrosse team practicing across the street. The noise turned out to be coming from the dog’s owner, who was trying to split up the animals.

The head barista at Korouva and president of Cat Partners, Sam Buehler, went to check on the scene, but came back inside screaming, “Madeline is dead.”

Camila Ramirez, who was also at the scene, described what had happened.

“I ran out to see a student chasing their dog, and a police officer standing over a cat. I couldn’t get a good look at the cat, so I was overtaken by denial. It wasn’t until the cat brought her head up that I knew,” said Ramirez.

Madeline lived underneath the porch at Korouva Milk Bar with fellow feral cat, Mr. Squinty. They are part of Southwestern’s Cat Partners, where students regularly feed other feral cats on campus. She was kind, loving, and beloved among students.

Her death has raised concerns about dogs on campus who are off-leash.

“The dog had no malicious intent, it was all an act of play. However, that does not excuse for what occurred in the end. Please, keep your dog on leash at all times on Southwestern campus,” said Ramirez.

According to the student handbook, students must always keep their dogs on leash and will pay a ten dollar fee to the university if they are caught breaking this rule.

“No dogs shall be allowed to run loose on campus. All owners should keep their dog restrained by leash or kennel and all dogs must be directly supervised.”

The dog from the incident was taken off-campus later that evening. Shortly after that, Madeline was buried under a tree right outside of Korouva Milk Bar by a couple members of Cat Partners.