Review: BROCKHAMPTON brings its energy to the Big Apple

Review: BROCKHAMPTON brings its energy to the Big Apple 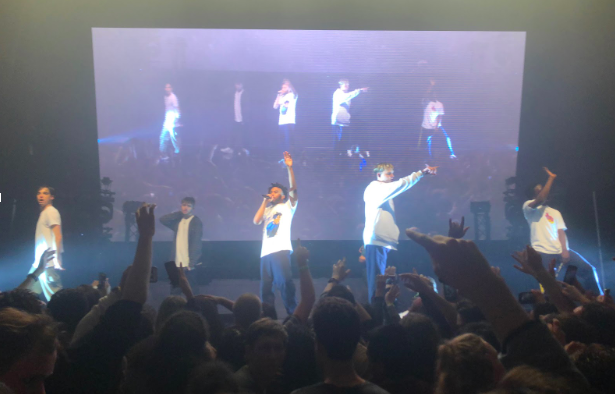 NEW YORK — Zero openers, 13 dudes and a sea of 3,000 moshers. This was no normal Monday night in Hell’s Kitchen.

In the last of its three sold-out shows in New York, BROCKHAMPTON erupts Terminal 5, a New York City venue, with ferocious bars, alluring cinematography, and foot-stomping mosh pits. The group met the energy of the crowd and fed it back to them. Then proceeded to excite it up, again and again.

The self-proclaimed “best boy band since One Direction” consists of 13 band members which include its vocalists, producers, writers, graphic designers and art directors, led by Kevin Abstract.

Opening with “WEIGHT” Kevin Abstract raps about the evolution of the band since it’s debut of its most recent album Iridescence. The track speaks to the weight of the inner-demons each performer has carried before coming into fame–touching on self-harm, identity, drugs and family. Following, the band performs “NEW ORLEANS” and the venue erupts with more moshing.

Whether it’s Dom, Kevin, Bear Face, Matt, or Merlyn, each performer steals the stage with their individual style as the others collaboratively energized the crowd. Despite the plethora of hype songs in the set, lower-energy emotional songs were placed in-between for successful pacing.

Constant cinematography behind the performers as well as lighting supported the set list’s narrative, transitioning between the high-energy hit “DISTRICT” to more-emotional “SAN MARCOS.” During this track, the newly California-based band, paid homage to it’s Texas roots. The lyrics express the band’s ambitions to grow and leave its past behind them. An aerial shot of the group displayed on the big screen as they laid their backs to the floor. 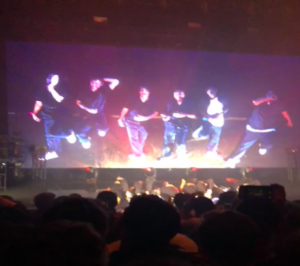 “I want more out of life than this, I want more,” the camera cuts to the crowd as it sings.

Powerfully opening with “WEIGHT” and softly ending with “FABRIC,” the audience was surprised with a  three-song encore: “1997 TRUMAN”, “1999 WILDFIRE” and “BOOGIE.”

No opening act left the crowd of high schoolers and twenty-somethings no choice but to contain its energy to mosh for the entire set. Not before long, several attendees had to force their way out after getting tumbled upon in need of a safer space. At times, I felt that crowd members were too focused on maintaining an aggressive energy that they lacked a response to the music. Thankfully, the multi-leveled venue offered concert-goers a clearer and safer balcony view. And in case you missed it, Paul Rudd was spotted on the balcony dancing his heart out.

In conclusion, the I’ll Be There tour is not a show to miss. The tour ends in Vegas at the Cosmopolitan on December 6. If you go, skip out on dishing out for a souvenir. Merch lines are lengthy and items will cost you an upwards of $15-$60. Snapchats, however, are free and forever.

BROCKHAMPTON has maintained its pioneering spirit since it’s major band member’s removal from the group. The group quickly dismissed Ameer from the band due to sexual assault charges in May. Nevertheless, the band continues to evolve and thrive, with a $15 million record label, soaring the charts, selling out shows across the country and debuting on The Tonight Show Starring Jimmy Fallon on Tuesday.