Growing Pains: The Evolution of BROCKHAMPTON

Growing Pains: The Evolution of BROCKHAMPTON 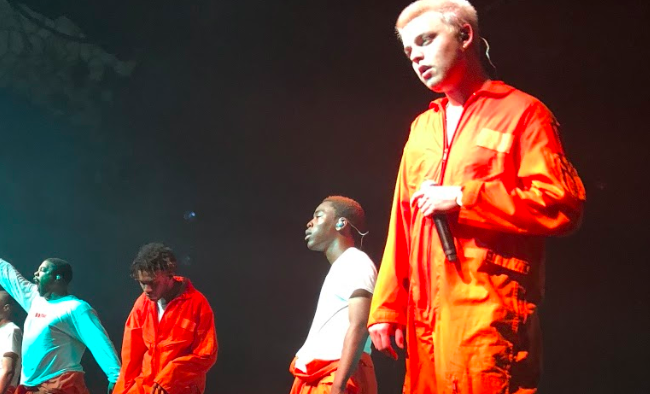 Picture a boyband. Are you envisioning an ensemble of homogenous, well-groomed boys, similar to the likes of NSYNC or One Direction? Enter Brockhampton, a hip-hop collective from San Marcos, TX who have made it their mission to change the image of the modern boyband. The 14-member collective is composed of rappers, producers, videographers, photographers, designers, and is the brainchild of Texas rapper, Kevin Abstract. By 2017, the boyband released a widely-praised three-album project titled The Saturation Trilogy.

Upon listening to any installment of the Saturation Trilogy, whether it be Saturation I, II, or III,  it is difficult to believe such an amateur ensemble of musicians created such a complex, alarming project without any guidance or resources from a record label. When listening to most tracks, captivating sound effects, hard-hitting lyrics, and pristine beats automatically capture the attention of the listener. However, unlike most modern rappers, the group’s approach to production and sound is methodical and distinct. There is no mumble rapping, and the five main rappers, Dom Mclennon, Russel Boring aka Joba, Matt Champion, Ian Simpson aka Kevin Abstract, and Merlyn Wood not only bring distinct sounds but unique narratives to each song. These members grapple with uncomfortable subjects such as mental health, sexism, and sexuality by angrily dissecting the issues throughout all three albums.

I had the chance to see Brockhampton in January at the Austin stop of their Love Your Parents tour, and needless to say, it was an experience. The instant the venue lights shut off, fans excitedly shoved to the front. I was soon pushed directly against the barricade, and could not focus on anything besides the crushing pain in my ribs. However, in a matter of seconds,  I was too busy jumping and screaming to give my pain smallest bit of attention. The boyband came running out in a sea of colorful lights, dawning bright orange jumpsuits, and jumping miles high to their alarm-blaring, trumpet blasting track BOOGIE. Dumbfounded by the excitement of the audience, I fought to retain my placement on the barricade. Abstract frequently demanded that the crowd open up a mosh pit, and refused to begin songs until the swarm of fans had formed a circle to his liking. Not once did any member of the group rap their verse out of breath or grab a drink of water, and there was no loss of energy throughout the entire performance. I left the venue that night knowing they were not a musical act to be ignored in the coming months.

After finishing the Love Your Parents tour, on March 30, 2018, Brockhampton signed a $15 million deal with the record label, RCA Records. However, in May of 2018, a scandal halted their rise to success.

Singer-songwriter Rhett Rowan, a former girlfriend of member Ameer Vann, flooded Twitter with sexual misconduct and psychological abuse allegations against the rapper. Although he admitted to being “selfish, childish, and unkind” Vann claimed he ”never criminally harmed anyone or disrespected their boundaries.” Despite Vann’s efforts to clear his name, on May 26th, the boy band announced his removal in a social media post. The remaining members of Brockhampton stated that they were “lied to” by Vann, and offered their sincerest apologies to his victim. After the announcement of Vann’s removal, the different reactions from fans were quite startling.

Many fans understood the severity of the situation and supported the boyband’s decision. However, those who did not agree with Vann’s dismissal exhibited feelings of distrust in the story such as anger towards Rowan for “ruining” Vann’s career and sentiments of criticism towards everyone but Vann himself. A worrying amount of fans wrongfully saw his ejection as an injustice, and the fate of Brockhampton hung in the imbalance.

Despite the controversy, by September of 2018, Brockhampton announced that their new album, Iridescence, would be apart of an upcoming trilogy titled The Best Years of Our Lives. Upon its release, Iridescence marked a noticeable departure from Brockhampton’s established sound, narrative, and subject matter.

Recorded in ten days at the legendary Abbey Road recording studio, Iridescence is an aggressive, yet experimental communication of the growing pains the group has struggled with in past year. Overloaded with heavy electronic sounds, and contrasted with pitched vocals, members hide behind the instrumentals in most of the tracks. However, this musical sheath doesn’t stop each member from successfully expressing their struggles lyrically. On the track WEIGHT, Abstract somberly reflects on his new life as a well-known artist, with lyrics such as “They split my world into pieces/ I ain’t heard from my nieces/ I been feeling defeated/ like I’m the worst in the boyband.” Other rappers in the boyband such as Mclennon, Champion, and Boring rap about the consequences of the spotlight, such as substance abuse and criticism. Mclennon comments on the invasion of his personal life in the song SAN MARCOS, with verses such as “Circle tighter than the Castro/ they feeding you Castrol/ You’d think that it’s gas/ you turn the key/ it’s a fiasco.” However, members simultaneously bounce back from the issues, as exemplified on the opening track NEW ORLEANS. Abstract sings the chorus of the song and exuberantly declares “Tell ’em boys/ don’t run from us/ I been down too long cousin/ I been down too long, brother / Tell the world/ I ain’t scared of nothing.” Boring uses the track to take a refreshing stance on the outlook of his future, calling out his critics by saying “Shit, never mind what I did back then/ You should take a look at yourself instead/ Maybe you can find yourself/ love yourself/ Here’s to health and here’s to wealth.” Brockhampton solidifies their ability to create insightful, un-angsty lyrics about a variety of challenging experiences. However, their ability to equally as impressively celebrate their success is quite an evolution. In addition to a growth in the lyrical repertoire, the instrumental aspects of their sound expand in new ways as well.

No longer does the group rely on catchy, bright, pop beats to capture the listener’s attention. Instead, weighty bass and beaming synth encapsulate many tracks such as BERLIN, DISTRICT, and  J’OUVERT. The songs are highly computerized, and the chaos of various tracks is similar to the sound of musical acts such as Death Grips. Additionally, sound effects are not nearly as melodic, soothing, or repetitive as they are on the Saturation albums. Instead, they are shrill, scattered, and distorted. Overall, the record was a shift from the sound and lyrics Brockhampton had established in previous albums; and fans were curious to see how these changes would translate in their performances. Thankfully, I had the chance to answer this question for myself.

As I eagerly stood in the crowd waiting for the performance to begin, there were already some notable differences. The group was forty-five minutes late, prompting various chants from frustrated attendees. Brockhampton came out and instead of rushing out with the captivating energy they had during the Love Your Parents tour, the boyband slowly arrived on stage performing the song WEIGHT, the most somber track on the new album. However, this change in tone did not stop fans from aggressively behaving, and security was forced to drag a steady stream of people out of the crowd in the first ten minutes of the show. Despite the slow start, Brockhampton was eager to prove they hadn’t lost their touch. Each rapper screamed lyrics as they sprang into the air, and once again, did not stop for water or run out of breath once. Abstract took a moment to address the obstacles that inspired their changing sound, saying “I didn’t know if we were going to tour. I didn’t even know if we were still going to be a band.”

While this year has been one of controversy and chaos for Brockhampton, they have achieved many milestones of success. The artistic growth from Saturation to Iridescence is undeniable. Lyrically, they are still honest but take a more reflective and mature route. Auditorily, they succeed in trying out a more experimental sound. Brockhampton continues to present themselves as an alarmingly talented boyband that deserves as much attention as One Direction, despite the difference in sound and appearance.

Tags
Previous Article
“Some Girl(s),” Presented by Mask and Wig
Next Article
Review: BROCKHAMPTON brings its energy to the Big Apple