A moving point in space is defined as a line. Lines vary in an indefinite number of ways. A line may be thick, thin, curved, or straight. It may point in a certain direction. It may, and often does, describe edges of a form. While a square or rectangle could easily be defined with a geometric definition, the human form becomes a little more tricky. Not defining our exterior though, but our interior. Our identity, self-contained within its ever-changing boundaries, is what the artist’s work presented in State Lines explores. 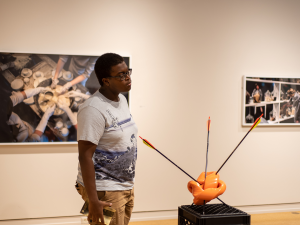 “DEASIL is a new venture” as Arturo Palacios, Southwestern class of ‘97, describes it. With his business partner Hilary Hunt, they set out to produce exhibitions not at a brick-and-mortar gallery but at different locations relevant to the work itself. Through DEASIL, Arturo and Hilary curated State Lines. This exhibit consists of four separate artists whose work varies in both content and medium. 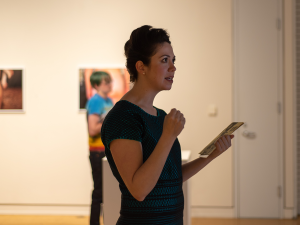 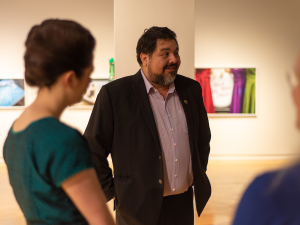 Photo by Alex Thompson
Arturo Palacios, co-founder of DEASIL and Southwestern class of ‘97.

The Bridge Club is a group of four women whose work mostly consists of live performances, often based upon their location and surroundings. Their work is represented by large-scale photographs taken during performances. These photos, though documentarian in their nature can also act as stand-alone pieces of art. While we can only imagine The Bridge Club’s live performances, which Hillary noted that you’ve really got to see in person because even the videos don’t do it justice, one of the most dominating pieces in the room is the large photo donning an image the words “Wish We Were Here” embroidered in red. Surrounded by it are the ladies of The Bridge Club dressed in mid-century garb. The photo evokes a real nostalgia with the white gloves and button-down dresses. We can only assume so much out of context, but it seems the piece speaks to their existence in the world or as Hillary more eloquently puts it, “how your place in time and within space makes you who you are and how artists deal with that.” 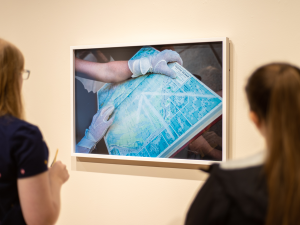 Buster Graybill’s pieces, all three dimensional, modern sculptural forms, are primarily made up of objects utilitarian in nature. Foam, milk crates, welded jack stands, arrows, and fishing hooks exhibit Busters desire to talk about rural and urban development. As Arturo explains it, DEASIL was looking for “artists who are working with personal identity within their work.” They saw this as a good opportunity to display Graybill’s work. In the gallery, Buster’s pieces are impossible to miss. They grab the attention of everyone who passes by. Three large sculptural forms sit not on traditional podiums but on coolers, books, and crates that become part of the form itself.

Low Tide rests on three black milk crates stacked upside down. Hillary comments that the “foam has been treated with truck bed liner to give it that gravelly texture.” Its coarse surface in combination with its shimmer simultaneously reflects light and casts unique shadows upon the piece. Pens and fishing corks extrude out of the black foam in a variety of bright colors. This creates a great juxtaposition that draws the eye in and around the piece. The black foam folds in and out of itself, creating new pathways wherever you look. It feels as though it is a continuous and moving object, constantly entering and exiting itself. It’s almost as if you closed your eyes and imagined what your identity looked like, you might see something like the sculptures of Buster Graybill. A solid form of abstract nature folding in on itself and constantly creating new forms with its original material. 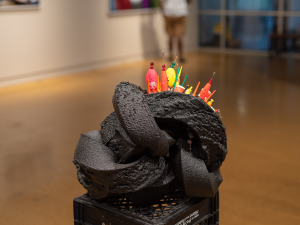 Ana Fernandez presents a series of paintings displaying Latino communities of South Texas. Anna’s paintings present seemingly mundane aspects of life in a more literal sense than the other artists. Birthday parties, empty streets at night, and small businesses make up most of the content of her work. As Hillary says, “you make choices about how to talk about…where you’re from.” These scenes seem to capture a specific point in space and time for Ana. The importance of identity, not only in how you choose to represent yourself, but how the places you live represent you. 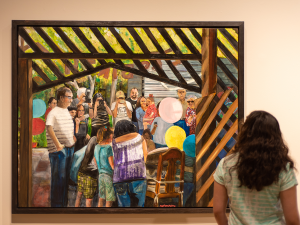 Liss LaFleur work is displayed in a variety of mediums including video, photographs, as well as sculptural forms. Three archival inkjet prints titled SPURS line one of the walls in the gallery. They display unknown, nude backsides with red and purple bruises. Next to them on podiums sit sets of spurs in aluminum and glass replicas. Close by is a screen with looping video of a woman wearing spurs, the aluminum ones on the podium, kicking herself in the rear while standing in a barn with a horse in the frame. These pieces could all stand-alone but become a lot richer when viewed together. As viewers, LaFleur’s confronts us with her actions and we are invited to think a little deeper about how we treat ourselves and those around us, human or animal. How does how we treat ourselves and others factor into our identity? In the video installation, the horse looms over the woman as she kicks herself. If we believe that humans hold power over animals then the artist has switched her role for that of the horse, who now holds the power. 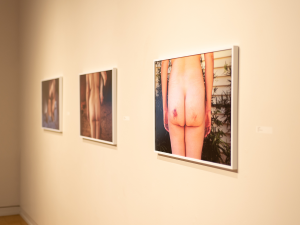 Through their works, all of these artists have shown us a little fragment of themselves. State Lines is less about the physical boundaries of city, state, or country but our existence within those boundaries and how they shape our own personal boundaries, and our identities. Our state lines do not define us but help us define ourselves.