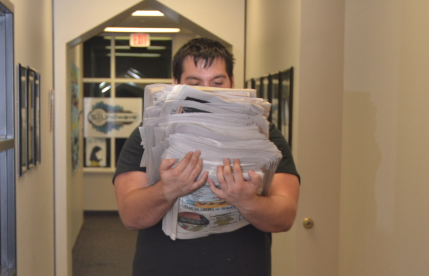 A recent poll of Southwestern students indicates that the Megaphone’s readership has increased by 300% following its most recent edition.

Composed entirely of coupons, it has become the most popular edition since the campus paper’s establishment in 1907.

This all-coupon edition was the latest attempt by the Megaphone’s editors in an effort to increase interest in the paper across campus.

It included coupons to several stores and restaurants across Georgetown which SU students frequent as well as coupons redeemable at on-campus locations such as the library coffee bar and the bookstore.

Junior M.T. Wallet, an enthusiastic new reader of the biweekly paper, indicated a very positive first impression with it, saying, “I never really paid attention to the Megaphone before, but after a friend showed me the latest edition I realized I must have been missing out. I got two free orders of breadsticks and $1 off my deodorant thanks to the coupons in that paper. If I’d started reading it earlier, I might have a second digit in my bank account.”

Southwestern’s administration has welcomed the Megaphone’s boost in popularity and has announced its intent to further develop the paper if it continues to attract new readers.

To this end several changes have come under consideration, including the addition of a dedicated coupon section headed by a coupon editor, alternating between articles and coupons every other edition, and hiding Target gift cards in select copies of the paper.

The 300% increase in readership has also sparked interest in expanding not just the paper itself but also the Megaphone as a student organization.

Among other developments, rumors have surfaced that the paper’s staff are preparing a coupon-themed performance for next year’s SING!.

The all-coupon edition has drawn mixed reactions from the Megaphone’s staff.

While some are happy to see more students interested in the paper, others fear a shift in focus from journalism to coupons which would marginalize newsworthy issues.

One such staff member, First-Year Bobbie Myers, commented that, “[The Megaphone is] a voice of democracy here on campus, covering the stories that all of us students really care about. For example, a few months back, hoverboards were huge… at one point every other post on Yik Yak had to do with them. When SUPD banned them, the Megaphone was the first news outlet to investigate and publish it. If we forsake that for commercial interests, no one will cover the real news. The coupons cannot come first.”

Myers’ right to make public statements concerning the Megaphone is currently under review by the paper’s editors.

Businesses in Georgetown have also had a lukewarm reaction to the recent all-coupon edition.

As one restaurant owner explained, “[they] never expected so many coupons to be cut out and used… now there are so many cheapskate college students coming in with half-off discounts that it’s actually cutting into [their] profits.”

Despite slight resistance from within and without, it appears that the previous all-coupon edition could be the start of a new direction for the Megaphone as it enjoys a massive surge in popularity.

Present this article to any participating Sonic for a free small order of tater tots.

Tags
Previous Article
Communications Class All Talk and No Do
Next Article
Academics Slipping At SU: Single Student Named to Dean’s List