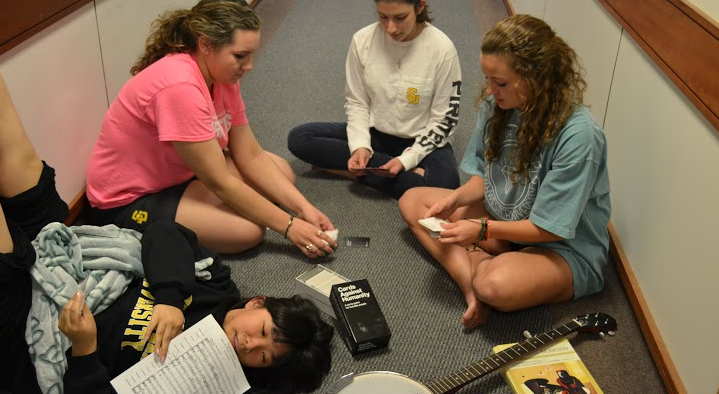 There has been much upheaval in the Fine Arts sphere over the past few weeks in regards to the number of out-of-class rehearsals these students attend.

A general consensus has been reached among them that upwards of six evenings per week is not nearly enough time to spend working on performances and exhibits and that an increase in rehearsals is required.

Specifically, these Fine Arts students have expressed concern that have “too much free time.”

“It’s not that we’re ungrateful,” music major Flatte Sharpe said. “We just have so much free time that we don’t know what to do with ourselves. I had so much downtime last night, I had to watch a movie on Netflix. I mean, what is my life coming to?”

Many have found that, despite all the hours of work they put in each week, there are still gaps in their schedules not filled with class or rehearsal.

This can create a self-destructive cycle for some students if they’re not careful.

“I’m caught up with all my homework,” theatre major Pross E. Nium lamented. “It’s a nightmare!”

Visual Arts students are also calling for more projects and assignments for their classes. Many of these assignments require work on the student’s own time in order to get finished, but research suggests that art students are spending proportionally fewer hours on assignments.

Friend groups are now being flooded with long-forgotten members who used to spend their days working tirelessly on sculptures or paintings.

“I’ve been able to hang out with my friends,” art major Monet da Vinci said, “which is nice, don’t get me wrong. But I really miss locking myself in the drawing studio for days on end, working until the early hours of the morning, listening to the same two albums on repeat. That’s really what college is all about.”

A spokesperson for Wask and Mig, the drama club and oldest student organization on campus, also released a statement addressing this controversy: “Our shirts for the club used to say, ‘I can’t, I have rehearsal,’ just as a joke, you know? However, we’re afraid that this might step on some toes around Sarofim since it’s become such a big issue, so we’ve had to stage a total product recall to avoid backlash. It was a very upsetting day for everyone involved.”

Their message has been conveyed loud and clear and the whole situation has rocked Sarofim to its core.

Professors are currently trying to appease these outlandish demands before the end of the year.

Please have mercy on the Fine Arts students and give them more rehearsals.

Previous Article
Academics Slipping At SU: Single Student Named to Dean’s List
Next Article
Board of Trustees is a Whiteboard, Rather Than a Board of White Men