ACL Fest: A Safehaven for Self Expression

ACL Fest: A Safehaven for Self Expression 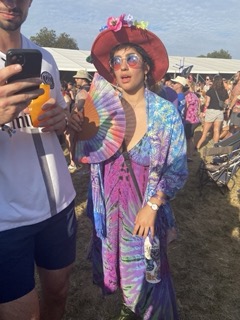 ACL is a place where I have always felt at home. I have attended the past eight ACLs; so I have observed the slow death of what the festival used to be. The outfits festival-goers wear have become increasingly basic. I couldn’t help but be depressed by the majority of the ACL outfits I saw this year. For FUN festival outfit ideas, see the photos below!

Austin has an entirely new landscape thanks to the transplants (aka the people who have moved here). A lot of the newcomers have flocked to Austin because they love the culture here. There is no stopping this city’s growth; as a Native Austinite, I want to do what I can to preserve the culture. Austin as a city is all about not fitting in. When true Austinites go to ACL, they let their freak flag fly.

I went to this year’s festival with none other than my roommate, and favorite Austin newcomer: Logan Ferguson. She is an Austin enthusiast ready to embrace this city for all that it’s worth. She feels like she fits in here much better than her hometown. Her ACL outfit consisted of pink-tinted sunglasses, which she received many compliments on, and a crochet halter top. (Looking for sunglasses? Check out these sick shades on Amazon!) Here are some photos from Weekend 1 to inspire people who are going to Weekend 2!

Austin has changed A LOT in the past few years. In certain areas, it feels like an entirely new city–one that is uncannily familiar yet strikingly different. I will always be nostalgic for the way things used to be. Honestly, when I think about how much everything, (including ACL) has changed– I can’t help but shed a tear. ACL has been a safe haven for me, it provided a space for self-discovery. Over the years, I’ve worn some outlandish shit. I’ve worn headbands across my forehead, rainbow sequins, dramatic sunglasses, and an obscene amount of tie-dye.

ACL was a circus– yet I never met a stranger there– it was a friendly place where everyone dressed crazy. The festival was half music and half people watching. There used to be more hippies– people dressed like fairies and brought hula hoops. I remember seeing topless women with painted chests laying in the sun. When I was a teenager, I was desperate to escape the pressure of fitting in. Of course, there were clouds of cliquey girls floating through the festival in light wash denim shorts and solid-colored tube tops, but these were far and few between. The little homogenous groups didn’t obscure the individualist atmosphere. ACL was the one place where the people who usually fit in, stuck out. My earliest exposure to counterculture was at this festival. While waiting for the next band to come on, I would often find myself on a stranger’s picnic blanket completely immersed in a deep conversation. The vibe of ACL has completely changed because people just won’t stop moving here! There is no stopping them.

The only thing Austin Natives can do to save the laid-back, bohemian vibe of our home is to share it with the newcomers. These new people are afraid to freely express themselves in an unfamiliar place. This is why it is so important to be welcoming to people who are new to Austin. Whether you are from Austin or not– please, for the sake of this city, be yourself! ACL is the place to embrace the wild, restless spirit within you. 🙂

Previous Article
Costa Rican vs American Coffee: I Will Never Taste Starbucks The Same.
Next Article
People with Alzheimers and Dementia-Related Disorders Need Mental Healthcare as Well; Behind the Scenes Interning at a Non-Profit