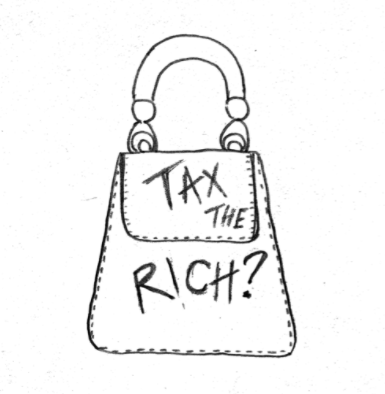 On September 13, 2021, at the sunset on the Metropolitan Museum of Art in New York City, luxury cars came rolling up to the red carpet, and celebrities in designer dresses stepped into the flashing lights of the paparazzi. The Met Gala is widely known as the biggest party in America and features the country’s most known names, all dressed to the nines to fit a specific theme. This year, the theme was “America: A Lexicon of Fashion” in accordance with a traveling exhibition housed at the Met (Borelli-Persson, 2021). While the theme is often broad and encompasses a wide range of fashion possibilities, this year’s theme resulted in a cacophony of styles and opinions represented on the red carpet. Particularly, audiences saw a large number of political views expressed in writing on the clothes themselves. From Alexandria Ocasio Cortez’s “Tax the Rich” dress to Cara Delevigne’s “Peg the Patriarchy” vest, celebrities are raising their voices to champion causes they care about. The question I want to pose is this: does their message actually carry meaning?

In the last few years, social media platforms have seen a rise in online activism, as nationwide and local grassroots organizations alike take to Instagram to coordinate and spread awareness. This has, in turn, led to what people are now calling “performative activism”. This is where an individual will post a photograph or a phrase without actually acknowledging the issue in a meaningful way. For instance, the hashtag movement #BlackoutTuesday in June of 2020 saw accounts posting black squares in ‘solidarity’ of the Black Lives Matter movement; however, many of these same accounts showed no proof of ever having attended protests, gathered information, or donated money to these causes. In the end, the black square symbolized nothing more than an empty screen, devoid of any actual aid or information to the cause it claimed to support. In addition, these posts often came without context or explanation, leaving their audience to draw their own conclusions about the actual meaning of the statement.

The phrases on the dresses and suits of the Met Gala seem to echo these instances of performative activism. While celebrities and influencers using their platforms to raise awareness of sensitive issues is undoubtedly an admirable sentiment, these statements come without explanation or actual support for these causes. For instance, Cara Delevigne’s vest “Peg the Patriarchy” seems to voice a brash feminist opinion but doesn’t offer viewers any idea of how to practically work to undo patriarchal systems of injustice. Kris Jenner’s “Say their names” sleeves don’t actually say the names of those lost to police brutality, or direct viewers towards places to donate funds towards families or organizations. Pete Davidson arrived wearing a jacket that stated “Racism=Nope”, a gross understatement of oppression that trivializes the Black experience in America (Higley, 2021). Even the “Tax the Rich” dress worn by AOC doesn’t draw viewers’ attention to the work that she has done in Congress to support impoverished people in America. These statements, divorced from their contexts and splashed across the fabric, actually take attention away from those risking their lives every day for progress in America and do nothing more than draw attention to the wearers as “good people” who care about American issues. They are a meaningless display of virtue, lacking in authenticity and accomplishing nearly nothing.

At the end of the day, however problematic the nature of these messages is, they fit perfectly into the theme: an American Lexicon of discordant messages and fighting voices, where shouted statements from celebrities overshadow the actual progress being made by individuals and local organizations. The political fashion of the Met Gala represents the sheltered musings of the capitalist elite in a desperate attempt to seem relatable, and I’m not buying it. When celebrities and influencers donate their fortunes to undo systems of oppression or spend their days marching on the streets to raise awareness, then I’ll be happy to watch them parade around in their finery. Until then, we’ll just have to do the work ourselves.

If you are interested in donating to the issues that these celebrities attempted to raise awareness for, here is a list of organizations to consider: