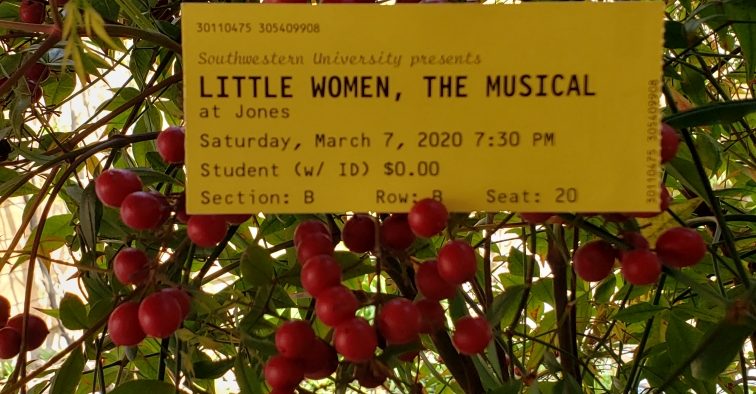 Southwestern’s production of Little Women was everything a good musical should be: expertly choreographed, punchy, funny, and with real heart. With a two weekend run beginning on February 28 and ending on March 7, Little Women: The Musical was a delightful escape into a different world with both comforting chronological distance and unsettling pertinence to the present. Its appeal begins with its proto-feminist plot and its rousing musical score, but best of all was its incredibly talented cast. An eclectic mix of first-years and upperclassmen, each of them was larger than life and clearly dedicated to putting a fresh spin on a nearly 150 year old story.

Much ink has been spilled over Little Women over the years—some of it by me—but this production surely merits some extra attention. Adapted from Louisa May Alcott’s 1868 book, the musical chronicles the lives of the March sisters—Meg, Jo, Beth, and Amy—as they come of age during the American Civil War. The sisters grapple with love and loss, moving from girlhood to adulthood and making new families and dreams of their own.

Meg, the eldest, was played with verve by Savannah Ritz, striking the perfect balance of maternal comfort and girlish glee. Meg desperately wants her own family; in Ritz’s own words, “It made complete sense to me while playing Meg, that she would want to create a home as beautiful as the one she was brought up in, and to create a place where her sisters could always return back to after the adventures she knew they would embark upon.” The way in which she ultimately carves out a space for herself—a room of her own, in Woolfian parlance—within the framework of the patriarchy is a microcosm of Alcott’s commitment to portraying dynamic women who defy expectations.

Next in line is Jo, intent on making her own way in the world and fighting with pressure on all sides to resist the social mores that say she should be more manageable, more malleable, and more maternal. Trinity Denson embodied Jo’s passion and eloquence, earning her top billing with her expansive vocal range, possessed of a vibrant voice strong enough to fill an entire theater. Denson is surely destined for a bigger stage than Southwestern’s if she so chooses. Denson’s Jo was probably just what Alcott had in mind when she dreamt up her heroine—fierce, brave, and above all, endlessly loyal and loving to her sisters.

The younger two sisters, Beth and Amy, were no less talented. Madison Rae Land was Beth, evoking innocence and naivete without ever overplaying her hand. Land’s Beth was a perfect angel in the house, an always cheerful companion with a dulcet voice fit for a series of playful piano duets with the elderly neighbor, Mr. Laurence, played with clever causticity by Kyle Livingston. Land obviously wanted to bring Beth’s knack for peacemaking to the fore, commenting, “She has the ability to influence those around her with her endless love and compassion. [Beth] shows the audience that we can show love to everyone around us indiscriminately.”

Last, but certainly not least, was Jana Steen as Amy. Steen slipped believably into the shoes of the youngest March with precocious ease, neither too sulky nor saccharine as Amy is sometimes wont to be. Unafraid to reach for her goals, Amy shouts at one point, “I want something that’s mine!” Steen so skillfully evoked the struggle of womanhood, trying to reconcile her youthful desire to claim her own corner of the world with societal pressure to be endlessly charitable and giving.

Presiding over the unruly Marches was Hannah Kral as Marmee, as dignified and naturally nurturing as Hera in her element, with a genuine gift for real emotion. Kral’s vocal range, like that of her co-stars, was a sight to behold. Campbell Duffy, playing Aunt March, balanced Kral’s optimism with deadpan humor and perennial pragmatism.

Together, these leading ladies painted an evocative picture that centered female autonomy at the heart of the narrative. What I found most enjoyable was their genuine camaraderie; they captured what women are really like when they are alone and truly free of patriarchal overbearance. This is perhaps best exemplified in the musical number “Delighted,” taking place right before Meg and Jo go to a ball together for the first time. Meg is nervous about her manners and Jo is more than a little wary about spending an entire evening in a tight dress. Marmee instructs them in not only the requisite dance steps, but also in the proper modes of comportment. What happens in this scene is a dichotomous blend of authenticity and performance.

As the girls learn how to accept male attention with a smile, they are also strengthening their bonds with their family and learning where it is—and is not—safe to be themselves. It is a performance for the male gaze, but it is mastered by a matriarch and wielded by the March sisters for both protection and pleasure. Such complex scenes need strong actresses to convey the depth and breadth of intricate power dynamics, and the cast of Little Women executed them with admirable aplomb.

I would be remiss not to mention the leading men, who were equal matches for the tenacious March sisters. Daniel Winkler played Professor Bhaer with amusing intellectual impassivity that was tempered by Denson’s indefatigable vim and vigor. Cayden Couchman as John Brooke was a bumbling—and nonetheless delightful—foil for Ritz’s serious, careful Meg. And perhaps best of all was Carson Petocz as Laurie Laurence, the objet de faveur of more than one March girl. Petocz’s boyish brio and earnest sincerity perfectly embodied the sort of man that would have been rare in Alcott’s day—one eager to support and empower the women around him, rather than to possess them.

And to top off such a production with a flourish, the set design paired the intimacy of the Jones Theater in the round with antique furniture—cleverly rearranged throughout the show by a nimble ensemble—and a real piano that brilliantly evinced the cozy feel of the March house. The costumes were equally well done, with a series of elaborate, period-accurate dresses for the sisters and debonaire suits for the men, not far off from the looks in Greta Gerwig’s 2019 film adaptation of the story. And though they are too often taken for granted, the sound design and lighting were professionally executed complements to the mise-en-scene.

Little Women was an adept symphony of talent across the board that is a testament to the skill and dedication of Southwestern’s theatre department. At the beginning of the musical, Denson’s Jo declared, “The world will remember the March girls!” I think she may well be right.