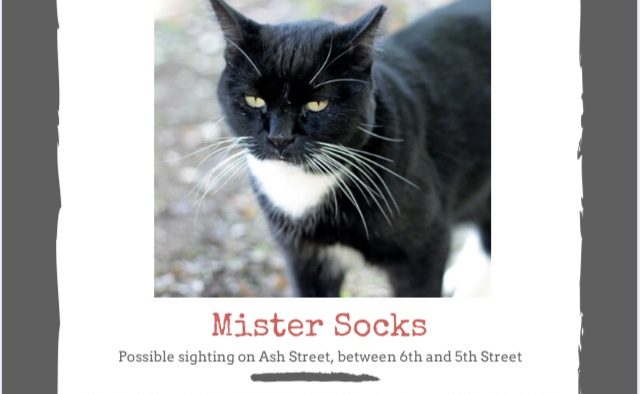 Mr. Socks, the most well-known cat on campus, has been missing since New Year’s Day. Mr. Socks used to live between the Lords and DLC apartments, where residents would feed him every day. He was last seen soaking up the sun in the grass on the afternoon of December 29. It was unusual when he stopped coming to the food bowl at his daily feeding time. After a couple of days, the author of this article reported his disappearance to Cat Partners, but since it was winter break and almost no one was around, there was not much that could be done. A missing cat flyer created by Kelly Lessard, the faculty sponsor of Cat Partners, states that he was missing as of January 1.

Mr. Socks is a friendly black and white tuxedo cat often spotted napping on a stairwell or sunning himself in the grass between the Lords and DLC apartments. He usually allows passers-by to stop and pet him, as he loves attention from anyone. His amiable demeanor and signature white paws make him popular among students. Cat Partners, the student organization in charge of feeding and vaccinating all the feral cats on campus, even distributed T-shirts and stickers with his face printed on them captioned “Southwestern University, home of my favorite feral cat.”

Sam Buehler, President of Cat Partners, made this emotional statement when asked what she would tell students who miss Mr. Socks:

“I miss him too. He’s the sweetest cat I’ve ever met, and not seeing him run up to me with his adorable, high-pitched meows when I’d feed his colony in the mornings is incredibly saddening. But you know, these are the risks to freedom for our beloved kitties. Some cats are meant to be outdoors, despite the dangers, and Mr. Socks is one of them.”

Mr. Socks is the second campus cat to have left us in the last year. The first was Madeline in 2019, who lived under the deck of Korouva and was unfortunately killed by an off-leash dog. According to the student handbook, all dogs must be on leashes at all times. Some people brought dogs on campus over break, including non-students, but hopefully this tragedy has not been repeated.

Buehler expressed her concern for Mr. Socks’ wellbeing: “I just hope he’s off getting loved on by someone, wherever he is. And if he’s with Madeline… then at least they have each other.”

One possibility is that he could have been inside someone’s home or apartment. Mr. Socks was suffering from some severe allergies the last time he was seen, so perhaps someone could have pitied him and taken him home to take care of him. But now that a month has passed this is not likely the case, unless he was somehow scooped up by a well-meaning Georgetown resident.

It is also possible that he could have simply run away, though this seems unlikely given his strong attachment to Lords residents and the other two cats in the north campus colony, Super Cal and Ziggy. However there has been at least one reported sighting of an unfamiliar tuxedo cat roaming the neighborhood west of campus. This has not been confirmed to be Mr. Socks himself, but some students may prefer to remain optimistic in case he has decided to mooch off of Georgetown residents, or if he got lost and is trying to find a way home. A missing pet report has been filed at the Georgetown Animal Shelter and Mr. Socks is microchipped, so if anyone happens to bring him in, Cat Partners will be notified.

Beuhler added that the other campus cats deserve some attention too, even though they are not as outgoing as Mr. Socks, because they have also been affected by his disappearance:

“Mr. Socks is not the only friendly kitty on campus! His colony-mates, Supercal and Ziggy, can be very skittish, as many ferals are, but don’t let that fool you – they both love to be pet, as long as you’ve got the patience to gain their trust. And at this point, they’re missing Mr. Socks just as much, if not more, than we are… they need the love.”

It’s true, the other cats miss Mr. Socks too. The three of them are a loving family. Super Cal still comes to the doors of Lords apartments looking for him. Anyone who has tips on Mr. Socks’ whereabouts is urged to contact Beuhler or Lessard immediately.

If you are interested in getting involved with the cats at Southwestern, Beuhler has announced that Cat Partners is hosting a “Cat Partners Interest Meeting” on February 6th at 4:30PM in the Mood Atrium: “Come learn about who we are, what we do, and how you can get involved!”

Tags
Previous Article
One Pirate’s Trash is Another Pirate’s Treasure
Next Article
Who Let the ‘Cats’ Out of the Bag?: Media Monopoly and Film