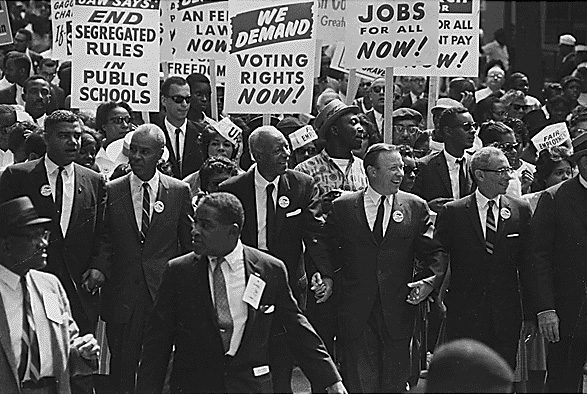 On October 21, 2018 the New York Times broke the news about a leaked memo from the Department of Health and Human services that is attempting to define gender as binary, determined by the genitalia a person is born with. Any disputes over a person’s assigned sex would be clarified by genetic testing. The release of this information led to an immediate backlash from the LGBTQ+ community against the Trump administration, taking to social media with the hashtag ‘#WontBeErased’ and making their voices heard. LGBTQ+(Lesbian, Gay, Bisexual, Transgender, Queer) activists gathered outside the White House that following Monday to campaign for transgender rights and recognition.

The visceral outcry against the administration’s denial of rights, and the call for active recognition of those rights hearkens back to previous movements for rights and representation. Most well-known of these is the Civil Rights Movement, which laid the groundwork for modern activist movements. The classical remembrance of the movement from the 1950s and 1960s, including marches, sit-ins, boycotts, and rallies. Now, with gender and sexuality as the new arena for civil rights activism, we can analyze how the Civil Rights Movement influenced the goals of transgender rights activism and predict where it might lead.

The 1950s and 1960s era of the Civil Right Movement is the most glorified of the movement, because it is marked by the most visible and tangible evidence of progress and change. No one really remembers the work of Civil Rights activists before the post-war era because it isn’t as exciting or engaging as the stories and icons like Rosa Parks or Martin Luther King Jr.; because there wasn’t any real progress in law and politics until the Civil Rights Act of 1964, the culmination of years of protests and campaigns. This includes protests against discrimination in public facilities and employment, the fight for government recognition, and the rise of youth participation in campaigning for civil rights.

With all this in mind, is it any real wonder that the fight for LGBTQ+ recognition and rights would so closely resemble the fight for black freedom several decades earlier? The transgender community still faces the same discriminations today that the black community faced under Jim Crow. Things like poverty, harassment and stigma, dehumanization violence, discrimination in employment and in public facilities. It makes sense that transgender rights activism would so closely mimic the Civil Rights Movement, because the goals are ultimately the same: official recognition of equality and protection of civil rights.

Of the similar discriminations that both communities faced, was the stigma around sexual behavior and the ramifications it had towards dehumanizing both groups. One of the many ways that the respectability of the black community was undermined and oppressed was the stigmatized ideas held around their sexuality. And not sexuality in terms of orientation, but sexuality in terms of activity. The image created by whites for the black community was an overly aggressive, hypersexualized caricature, an inhuman villain undeserving of equal treatment or protection. That was the popular justification for legal discrimination, an image the black community had to actively fight against to make their voices heard. The transgender community is facing similar issues today.

There is a common misunderstanding around the transgender community, and the greater LGBTQ+ community, that not being heterosexual is the same as being hypersexual. The misunderstanding that being transgender is a fluid decision to justify nonconforming and predatory behaviors. It was this stigma that legalized transgender bathroom bans in multiple states across the United States. The stigma that all transgender people are either sexual predators or confused individuals in need of correction is the exact same stigma that the black community fought against during the Civil Rights Movement.

That is the reason why the movement for transgender rights is so similar to the Civil Rights Movement, they are fighting against the same acts of discrimination and dehumanization. In fighting the same enemy, similar tactics are bound to be used. During the popular era of the Civil Rights Movement, the black community fought for their goals by increasing visibility of the community and awareness of the oppressions they faced. This manifested primarily through boycotts and marches for employment and equality, emphasizing the need for economic and civil rights. The March on Washington for Jobs and Equality (1963) is one great example of how the black community took to the streets to use visibility to make their voices heard and demand for action from the government. Similarly, we see the transgender community taking to social media and campaigning on the streets to promote national visibility and make their voices and demands heard, as they did with the rallying slogan of ‘We Won’t Be Erased’.

Based on how the Civil Rights Movement progressed, we can expect to see more demands from the transgender community for recognition and rights. It is likely that the more the government tries to deny the existence of the transgender community, the more they will strive to make their demands heard. More and more pressure will be placed on the courts to legalize their equality, and when that law is passed, the government will be expected to uphold those laws and protect their civil rights.

Though the Civil Rights Movement is over, its legacy of activism continues on. Even under the new face of the transgender community, the values and goals remain the same. To fight oppression and have legal recognition of the rights of the community. And as we see these stories continue to repeat themselves, maybe consider the actions of the past and have them inform our path towards the future.

Tags
Previous Article
Southwestern Holds Second Annual Vigil for Transgender Day of Remembrance
Next Article
People with Mental Illnesses are Not Bad People, and We Can Look Up to Them