Aliens Inside of Mars!

Aliens Inside of Mars! 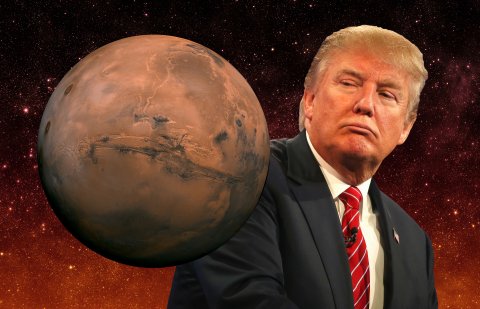 In a time of social and political unrest, President Trump has made a shocking announcement that has turned the public eye away from politics and toward science. On Thursday, Febrary 30th, he declared that there are alien lifeforms living under the surface of Mars, and that the government has been aware of this fact since before the landing of the Mars rovers.

Life on Mars is an idea that has fascinated people since the realization that the Red Planet is, in fact, potentially inhabitable. Numerous works of fiction, both literary and on the silver screen, have experimented with many different forms of “martians”. It was one of these works that launched the government investigation of Mars and eventually led to the discovery of life beneath its surface.

The Martian Chronicles, written by famous science fiction author Ray Bradbury, tells the story of Earth’s first expeditions to Mars. In his series of short stories, published as one large “novel” in 1950, does not describe the martians as an inviting group. In fact, all members of the first three expeditions to Mars are killed. Alarmed by the violent and powerful nature of Bradbury’s vision of the martians, the government took the science fiction author into questioning and made a shocking discovery. Bradbury claimed that the aliens of his stories were, in fact, very real, and that they had made a telepathic connection with him.

After months of rigorous of investigation hidden from the public, the government was eventually able to confirm Bradbury’s claim in 1952 – martians were real, and, as The Martian Chronicles had tried to convey, they were very dangerous. It took another decade before the government was able to successfully establish communication with the martians. When they did, they were able to convince the alien race that it would be best the general public of Earth never know that life on Mars existed. The aliens agreed that excessive contact with Earthens could be potentially devastating to both planets, and spent the next several years shifting their population beneath the surface of the Red Planet. By the time the first pictures of Mars’ surface was taken, not only were the martians gone, but they had eliminated all traces that their civilization had ever existed.

In his public statement, Trump revealed that the only slip in this cover was the Viking 1 photo of the legendary “face on Mars”. This face was later declared to be a “rock formation” made to look like a face by the angle of the light. In his statement, Trump confirmed that this was a cover up – the photo truly was of a martian skull that had been unearthed since the martians’ descent into the depths of their planet.

So why was all this information revealed now? Trump states that this secret is the first of many historical government cover ups that he intends to expose to the public as a vouch for his own honesty. For now, any attempted communication with these martians is strictly forbidden.