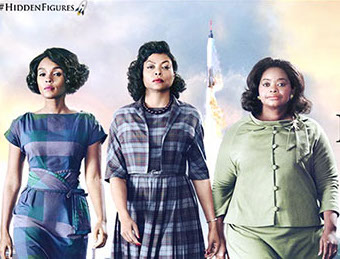 The late 1950’s and early 1960’s are often seen as a turbulent time in American history. The country was experiencing new types of leaders, technologies, and with the Civil Rights movement well underway, a renewed fight for equality. In the middle of it all was the space race against Russia, and in 1961, President Kennedy uttered the famous words: “We choose to go to the moon. We choose to go to the moon in this decade and do the other things, not because they are easy, but because they are hard…”

Hidden Figures utilizes a juxtaposition not often seen in films that take place during this time period. Overlaying the American Space Race with the Civil Rights movement helped shine a focus on the unheard stories of the African American women who worked for NASA. These are the women who largely contributed to America’s successful launch of astronaut, John Glenn,  into orbit.

The movie focuses on three women in particular: Katherine Goble, the first African American woman assigned to the Space Task Group; Dorothy Vaughan, a mathematician and programmer, fighting to be officially promoted to the position of supervisor; and Mary Jackson, a “computer” desperately fighting to be NASA’s first female African American engineer. The film highlights the struggles the three women face within NASA, including segregated bathrooms, obstacles to advancement in the workplace, and dismissal of their talents as mathematical thinkers.

One factor that sets Hidden Figures apart from other Civil Rights movies such as Remember the Titans are the scenes that convey feelings of shame from the protagonist’s’ point of view. Many movies in this genre focus on the victorious feeling of accomplishment when African Americans are able to overcome racism and other forms of opposition, but Hidden Figures takes this a step further by acutely focusing on what, exactly, was keeping them from achievement in the first place. The film doesn’t need scenes of protests gone wrong or unjustified violence to generate sympathy for the protagonists. Instead, it focuses on the somewhat overlooked fact that African Americans facing racism from everyone, including some of the most brilliant minds in the country. By doing so, it connects more directly to its audience and perhaps even unsettles them, because what they see isn’t radical violence – it’s the terrifyingly quiet normalcy.

Contrasting this discomfort is a surprising amount of comedy that makes the film even more appealing. Despite primarily being a movie about oppression, the moments of comic relief seem to make the both the film and the protagonists more relatable. The filmmakers take full advantage of the fact that the majority of the characters are brilliant scientists, and the result is a movie about science and math that connects with, rather than alienates, its’ audience.

The three main actresses are spectacular in their roles and showcase their emotionally charged story with a great level of skill and grace. Octavia Jackson, who portrays Dorothy Vaughan, was nominated for ten different awards for her performance in the film. However, it is Kevin Costner, who seems to steal the show. Costner plays Al Harrison, head of Space Task Group and boss to Katherine Goble. While Harrison risks falling into the stereotypical “color blind” trope (as a character who only exists to offer the oppressed heroine support), he tends to do the exact opposite – he is often unaware of Katherine’s troubles. However, on the few occasions that he does offer support, it is in an indirect and almost indifferent way. Costner enhances this character tremendously with his emotionally raw acting. The role could not have been cast better.

Some might complain that Hidden Figures doesn’t quite push the boundaries enough. As a PG rated film, it could easily be labeled as “polite” or “too clean”. Indeed, it does seem light hearted in comparison to recent films such as Selma, but it also (rather boldly) points out that racism wasn’t all violence and cruel words. More often than not, racism existed quietly, making it all the more dangerous. Not only does the film deliver that message, but it does so at a level that all audiences, young or old, can understand, making it both effective and entertaining – a fantastic film to wrap up the year with.