Libertarianism: A Response to Political Unrest in a Cemented Binary Party System?

Libertarianism: A Response to Political Unrest in a Cemented Binary Party System? 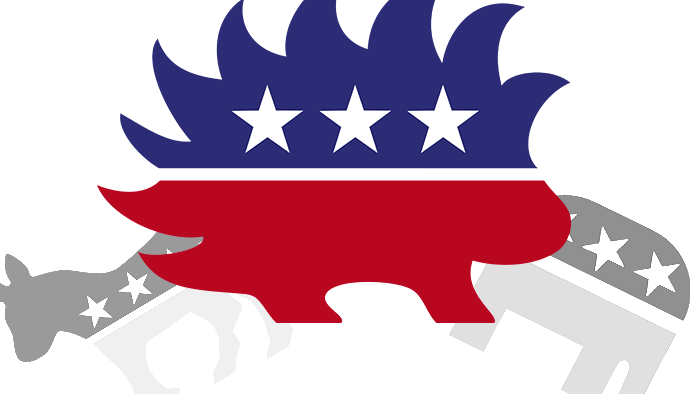 In 1971, the Libertarian Party was founded to represent Americans as unique and competent individuals. Since then, Libertarians have prided themselves on a few grounding principles: America’s heritage of liberty, unique expression of freedom, a caring and humanistic approach to politics, consistency of principles, and tolerance.

“The Constitution of the United States is all about limiting the size and scope of government in our lives, allowing you and I as individuals to make choices in our lives regarding everything as long as those choices don’t put other people in harm’s way,” Johnson said.

Specifically, the Libertarian Party, the nation’s largest third largest political party, supports practices such as free trade, removal of the government from the personal decision of abortion, abolition of the death penalty, and freedom to enact one’s own sexual orientation and behavior.

Support for a third-party presidential candidate mounts, especially in the general upset of the 2016 race, the results of which could forecast a greater climb in popularity for the Libertarian Party.

“I think a two party system is largely flawed and doesn’t promote the diversity of ideas in the American political sphere,” senior Eric Blumenschein said, though mentioning he does not identify with a particular party.

It is no secret that this year, the Republican and Democratic presidential parties are both failing to appeal to many Americans. To this end, the Libertarian Party’s website claims that “Most Americans, after some thought, prefer the Libertarian option in politics. Most people in their private, non-governmental, affairs deal with each other on the libertarian premise of mutual respect.” Indeed, some polls have indicated that over half of Americans support Johnson’s inclusion in nationally televised debates.

Less exciting, though, is that support for Johnson as president generally polls between 6-8% nationally. And indicative of this support which, in practice, appears to be rather weak– the voice of the Libertarian Party at Southwestern is also relatively weak, despite a platform that could easily coalesce with the beliefs of progressively oriented college students.

Junior Angel Grayson said that although her beliefs typically have aligned with a certain major party, she does support the idea of a third-party candidate for president. But, similar to many Americans, she struggles to see the functional impact of a vote for a third-party candidate: The rhetoric of “throwing your vote away” threatens the support for Johnson, the Green Party’s Jill Stein, or others, and discourages sizable growth of these political parties.

Nonetheless, the consideration of parties like the Libertarian Party continues to penetrate the political sphere during the 2016 political season. Even though Johnson and Stein are currently polling at about 6.5% and 2%, respectively, those are significant increases from 2012, when Johnson and Stein both ran for president, and neither received over 1% of the popular vote. This trend toward third parties has extended to Southwestern’s campus as well.

“I feel very strongly about the presence of personal responsibility, which the Libertarian position seems to advocate and uphold,” junior Madeline Ezell said. “I don’t think the government can cultivate community responsibility– that seems to be something that must be arrived at on a personal level, leading to personal response and action. Because of that, I think Libertarianism makes the most sense.”
Although Johnson will probably not be elected as America’s president this year, the unpopularity surrounding the characters and discourse of this election has prompted the nation to challenge the seemingly cemented binary establishment of politics. With increased recognition of the additional political platforms available to American citizens (and with heightening discontentment with governmental action), we could see a Libertarian in the Oval Office soon enough.

Tags
Previous Article
“Allow Me: Facing Identity” Art Exhibit by Southwestern Professor
Next Article
Why and How to Care about Rare Diseases