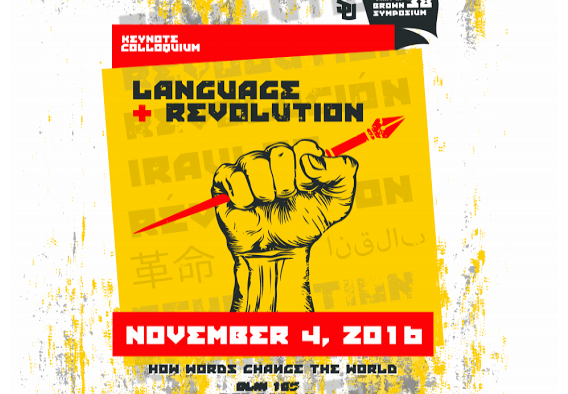 The 38th Brown Symposium will explore the intersections of art and revolution in a two –part series presented as a Keynote Colloquium November 4th and an official symposium March 1-3rd.  On a biannual basis, the symposium addresses themes of humanity still prevalent today by featuring  interactions with distinguished speakers. Southwestern Professor Michael Cooper developed the Art and Revolution themed symposium to invite a conversation about artistic contributions to revolutions, while Professor Katy Ross organized the precursor event, Language and Revolution: How Words Change the World.

“Words cause revolutions, so looking at the written or spoken word as a means for people to revolutionize the world and act as a catalyst is important,” Ross said.

Three speakers will address the power of language through their current linguistic research, including David Harrison, who travels the world preserving endangered languages in spite of the digital age of communication. Efforts such as his lend thought to the evolutionary liability of projecting static qualities to the fluidity of words and their undertones of morality.

“Whenever you record something, it tends to stabilize it in a way that denies its dynamic changing in response to circumstances,” Cooper said. “If you think of language as a catalyst for change, then by freezing language you’re capturing something that is supposed to create change, all of which fits neatly into what I think Harrison is going to talk about.”

Another profound thought to address during the November Colloquium comes from a novelist and translator Flavia Company and explores the mitigating value of translation.

“Translating languages can redirect revolutions,” Cooper said. “Still, there is a fear that through translation the second language is unable to capture the ideas the original language had,” Ross said.

Homecoming provides the opportune time to have such discussions, as it brings together alumni and students to converse as equals of the Southwestern experience. The colloquium will end with roundtable discussions, questions and answers panel, and a reception. In March, the official symposium will commence on the theme of Art and Revolution.

“The tendency is to think of the arts as nice appendages to life,” Cooper said, “To many, the arts are niceties that are added on to the essence of life. So there’s this attitude that these things are somehow apart from life, but if you accept art and language as catalysts for change then you’ve now given yourself an educational choice to see revolutions more deeply.”

The theatre students will display the choice to expand society’s approach to art as revolutionary through its performance of “In the Next Rule,” by Sarah Ruhl, which explores the sexual revolution during the Victorian Age. Following, international artists will display what revolutionaries sound and look like, giving students a direct experience.

“When you read about revolutions, you’re reading a translated version of that experience,’ Cooper said. “The presence of a mediator can be useful, but who is to say it’s more useful than your own takeaway if you were there looking at the art?”

Students will get the chance to express their own takeaways through the public salons framed as integrated conversations breaking the 4th wall of panelists and listeners to truly be an equal medium. The entire symposium encourages student involvement and acts as its own Paideia moment. By connecting various disciplines, not only will the Brown Symposium provide an academic opportunity, but also a culturally-defining one.

Tags
Previous Article
“Allow Me: Facing Identity” Art Exhibit by Southwestern Professor
Next Article
Why and How to Care about Rare Diseases