The Number One Rule for Smoking On Campus

The Number One Rule for Smoking On Campus 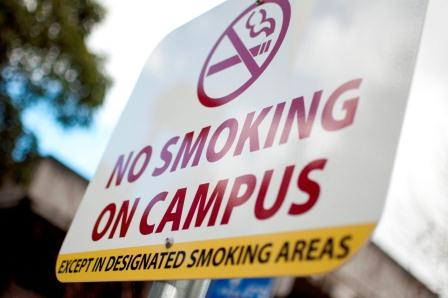 So, one might be lead to inquire about what exactly the rules are for smoking at our school. According to page 59 of the SU Handbook:

“Smoking tobacco and vaping is prohibited in all buildings and within 25’ of building entrances, operable windows or air intakes. This includes all residence halls and apartments, including the balconies and patios in the apartment complexes.”

As you can see, there is literally one rule that our campus has that addresses the smoking issue: as long as you are at least 25 feet away from a building entrance, you’re good.

However, Kelli Becerra, a certified Health Education Specialist here at SU is unsatisfied with the lack of tobacco rules that the school enforces. She also believes that the general lack of signs that should display the tobacco rules around campus is allowing students to “smoke right at entrances/exits all the time,” without knowing that they are doing something wrong.

Another issue that she has found with the SU Tobacco rules is that if you can smoke anywhere that is at least 25 feet from a building, then you can basically smoke around most of the campus. This can lead to the exposure of quite a few non-smokers to secondhand smoke just by them walking near someone who is smoking.

According to The American Lung Association, secondhand smoke leads to approximately 7,330 deaths caused by lung cancer and 33,950 deaths caused by heart disease every year; just from inhaling another person’s smoke.

Becerra is a strong supporter of tobacco-free campuses and she is pushing for Southwestern to join the alliance by enacting a Tobacco Free policy. This would entail the prohibition of “ALL Tobacco products (smoke and smokeless forms of tobacco), and includes electronic devices” on campus.

In order to address this issue, Southwestern has joined the Peers Against Tobacco project which aims to reduce the use of tobacco in the college community and is coordinated by the University of Texas at Austin. Also, The Student Health Advisory Council (SHAC) is working to raise awareness about the campus’ need for a better smoking policy and the dangers of smoking.