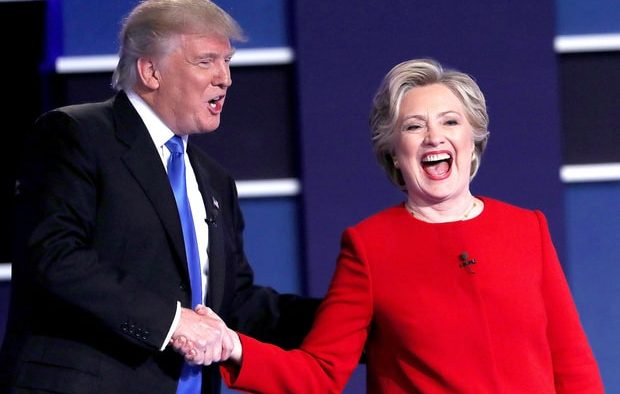 For those of you who spent last night watching the Trump vs. Hillary showdown, then you know as well as I do that it was heated to say the least. Insults, personal jabs, and counterattacks from both candidates fueled the debate nonstop.

With NBC Nightly News anchor Lester Holt serving as moderator, there has been a lot of outcry over his evident bias towards Clinton. This became obvious when he failed to press her on the ever infamous 33,000 emails she allegedly deleted or the tragedy that befell American soldiers in Benghazi.

However, Holt dug deep into Trump’s tax records, asking why he hasn’t released them. Trump responded with the headstrong statement, “I’ll release my tax records when Hillary releases the 33,000 emails.”

The key questions asked that both candidates needed to address covered topics from race to cyber warfare to the mass amounts of jobs that are leaving America. Hillary obviously prepared for her speech ahead of time, while Trump fired off retorts one after the other. Looking at how each candidate handled the questions is key to deciding who the public best sees fit to become the next President of the United States.

While Donald J. Trump, the Republican nominee, has been a lifelong successful businessman, Hillary Clinton has served as First Lady and Secretary of the State is representing the Democratic party. While both candidates have had their fair share of scandals now is the time to decide. Now is the time to ask critical questions, much of which were sidestepped or downright avoided during last night’s debate.

Holt never asked Clinton about her past record of supposedly racist statements, including but not limited to her “super-predator” remarks as First Lady, or her apparently explicit appeal to white Americans in her campaign against Obama in the primaries.

Holt continued to asked Trump about the Birther conspiracy theory and cast it as racist. On the other hand, Trump came under pressure when confronted with his stance with the war in Iran.

All in all, I think that the questions asked did not draw enough attention to some real problems America is facing today, issues such as but not limited to the threat of terrorism (nuclear or otherwise), lack of jobs, or illegal immigration.

We as voters have to look at the candidates before us and ask ourselves which is better fit, physically and mentally, to run the country. Simply voting for a certain candidate because a celebrity endorses them is beyond damaging, as the consequences of one vote are taken into account. Do your research and check the facts. Do not stay fixated on bias or false claims made against either candidate without listening to their policies and viewpoints.

So, the question is, do we want a billion dollar businessman who wants to make America great again (although some find him quite the opposite) or do we want a former president’s wife who has come under much rumored suspicion during her political career? My advice to you is to make sure you understand each candidate’s position before making a claim on the issue, as uninformed politics are saddeningly popular.