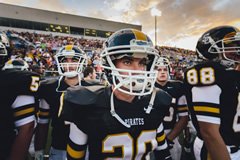 By Matt A. Gonzales

When Spring Break comes around, most people think partying on the beach. It is a week vacation from all school activities. However, to some fall athletes, it is the sense of normalcy before hitting the grind again.

Though these athletes aren’t in season, these practices are critically in helping set up what is to come in the next season. It is the first time in months that these athletes get to work with coaches, legally, since the end of the season.

Football just finished up their spring season last Friday. Since the end of the season, the team has been in the weight room getting stronger and on the track, working on their speed and agility.
However, after spring break, the team had the opportunity to practice as a full team for the first time in roughly four months. The excitement was all there.

“We had been training all that time, and it was time to see where everyone was, relative to their football skills,” Junior Running Back Dillon Wilburn said. “Once we took the field for the first time, it was electric. Everyone was excited and energetic. It really helped keeping the energy of practice high.”

There is a major disadvantage to practicing in the spring at the Division 3 level. There is a rule that states that teams are not allowed to use equipment, such as helmets and shoulder pads, during practice. Without this equipment, practices become non-contact. This idea does seem a bit counter-productive, however there are ways around things.

“During drills, we use these special yellow arm shields so that we can still simulate so sort of contact,” Junior Defensive End Nick Mask said. “It isn’t the same, we get that, but with the way the rules are right now, it is all we can do.”

This rule may not be popular amongst the players, however it could be changed in the near future. Earlier this year, at the NCAA National Convention, a rule change along padded spring practices was put up for a vote, however was struck down by only seven votes.

“Regardless of what the rule says, we are still going to practice as fast as we can go,” Wilburn said. “Without contact, though, it allows us to look at the mechanics of the plays and really break things down. We really drill in the basics of hand placement, foot work, reads. All of these are important to the game that we can polish without knocking heads with each other.”

The team was allowed 16 practices this off-season, which stemmed from the middle of March to late April. There was about 3 hour and a half practices, each week, with an occasional fourth practice, if the team had to make up for rescheduling reasons.

After these practices, the outlook looks fairly well for the next season. This will be just the third team since reinstating the sport back in 2012.

This upcoming season is set to begin with the Pirates heading to Abilene, TX. They will face off against Hardin-Simmons University on September 5th.