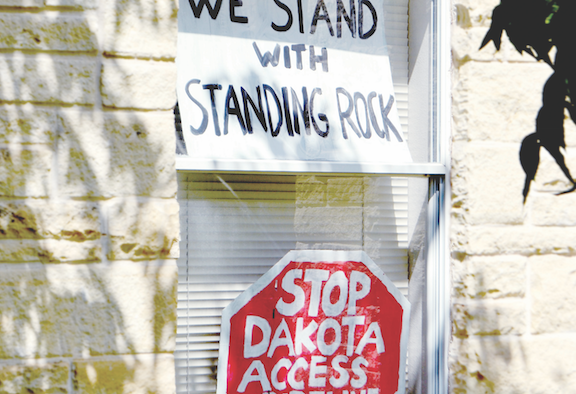 Rural North Dakota is seemingly the last place on earth to be the stage for a monumental cultural and environmental protest. The controversy surrounding the Dakota Access Pipeline has transformed a once remote area into a battleground for cultural rights.

Proposed in 2014 by Dakota Access, a subsidiary of the Dallas based Fortune 500 company Energy Transfer Partners, the pipeline will be 1,172 miles long and 30 inches in diameter. If completed, the pipeline will transport upwards of 470,000 barrels of light sweet crude oil per day from North Dakota to a terminal in Patoka, Illinois. From there, the oil will be sent to refineries across the country and made into useable fuel.

Energy Transfer lists protecting landowner interests and the environment as a top priority of the project. Additionally, Energy Transfer states advanced pipeline technology used in the project will ensure greater safety and reliability.

Construction of the pipeline, a $3.7 billion project, has been meet with opposition from Native American tribes. Members of the Standing Rock Sioux Tribe began protesting in April as construction on the project began. The protest has grown to include hundreds of people from tribes across the country.

Citing the project as a cultural and environmental violation of land, members of the Standing Rock Sioux tribe say the pipeline traverses ancestral land. The pipeline would run within a half mile of their reservation and, they say, endanger their sacred sites and contaminate their water supply if an oil spill should occur. Also concerning to community members is the potential environmental damage which might be caused by the pipeline, particularly the possible catastrophic consequences if it were to break near the point it crosses under the Missouri River.

Recently, protesters have been marching a mile up a highway to the pipeline construction site and engaging in peaceful protest and prayer.

In an earlier protest, a group of 31 young Native Americans from tribes from North Dakota, South Dakota, Iowa and Nebraska ran a 2,000 mile relay to the White House to demonstrate opposition to the pipeline.

September 9, a federal judge denied the Standing Rock Sioux tribe’s request to stop construction. The Obama administration immediately stepped in and ordered the Army Corps of Engineers to pause until further notice.

A federal appeals court ruled to halt construction on September 16 to give the court an opportunity to assess the damage the pipeline could cause to sacred land. Standing Rock filed an appeal, which was moved to the Washington, D.C., circuit court. Oral arguments will be heard October 5 by a three judge panel.

“I know that many of you have come together across tribes and across the country to support the community at Standing Rock,” President Obama said at the White House Tribal Nations Conference on September 26. “And together, you’re making your voices heard.”

The protest raises the question of what will be gained and lost, and by whom, if construction of the pipeline continues. In the meantime, during the appeal process, Dakota Access has been ordered by the court to stop all work 20 miles on either side of Lake Oahe.

Tags
Previous Article
Why and How to Care about Rare Diseases
Next Article
This One is For the Ring!