Angel of Small Death and a Sold Out Show: Hozier Live

Angel of Small Death and a Sold Out Show: Hozier Live 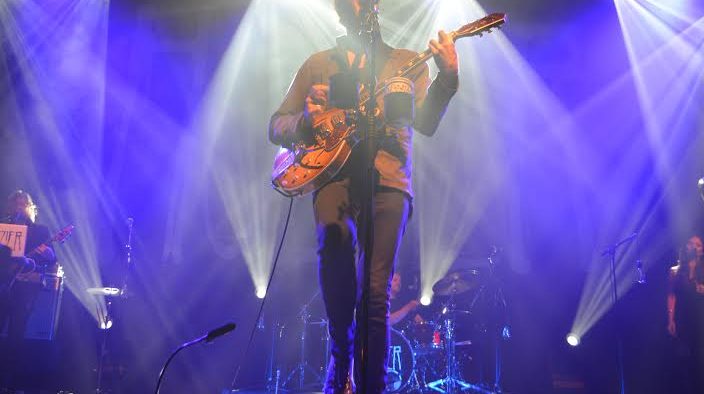 An old wives tale once said that famous blues singer Robert Johnson sold his soul to the devil in order to become the best blues guitarist that ever lived. Whether you believe the tall tale or not, he definitely lived to be one of, if not the greatest, blues singers of all time.

In a day and age filled with a younger generation listening to constant pop hits, it is no mystery why Hozier has stricken the world as refreshing. His sound is reminiscent of another era, stopping on the border of good old fashioned blues, and sweet Irish folk tunes. He shows off his soft spoken, thoughtful nature as he performs sinfully sweet ballads like “Cherry Wine” or “In a Week” and then easily transitions into soulful vibes, playing grimy blues guitar riffs with the depth and despair of a seasoned veteran.

Hozier’s smooth voice floated high above the audience of the Austin Music Hall and his lyrics were often dark, but oh so joyful in delivery. At one point in his song “Arsonist’s Lullaby,” he sings, “Don’t you ever tame your demons, but always keep ‘em on a leash.” Hinting to his audience that he, too, has quite the dark side, it appears counterintuitive as he sings songs such as “Like Real People Do,” which embodies charming sentiments of long lovers with an Irish twist. His music really would appear to change like night and day, but flowing so seamlessly together.

Hozier took us on a wild ride through the dark twisted third dimension of his psyche, all the while baring his heart on his sleeve along with sharing plenty of facts about his home country of Ireland. He juxtaposes heaven and hell in the most satisfying way, melding sweet melodies with twisted, tragic tales. He’s an intriguing performer and genuine enough to leave his audience wanting more. He was so genuine that he thanked every single person in his band and on his stage crew that night profusely. It was apparent that to him, his success has truly been a group effort.

Leaving after a two hour set, I felt as if I had just sat through a set of gospel worship. If I were to pinpoint the exact magic of Hozier, I wouldn’t be able to explain it in just a few words. He strikes me as a man who’s searching for God and a man who finds solace and torment in love just as we all do.

Personifying the sins of Eden and the devils that haunt him, he invited us on a journey through his Irish soul and through the wretchedness of what some of us would rather forget about ourselves. As the ethereal, earthy vocals rang through the hall, it was clear that in some way, we’re all on a path to righteousness.