The State of Men’s Lacrosse

The State of Men’s Lacrosse 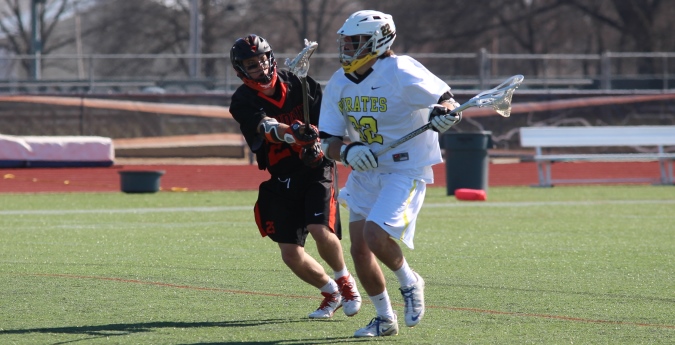 Coming off of a shining 10-5 season in 2014, the Southwestern University Pirates Lacrosse team now sits at 4-8 on the season. The men have a home record of 1-3, 3-4 on the road, and a lone loss at a neutral field.

Though it may not be the ideal situation to be in, this season has been called a hiccough to a much larger positive progress. Senior defender Justin Corwin seems to think that while this season did not live up to the high expectations the squad and the coaches had in early February, it is just part of the game.

“We are such a young team,” Corwin said. “I see us moving in the right direction after this season, using our mistakes to learn from and improve on.”

It seems that the biggest concern on the team is experience. First-years make up the majority of the team, having a total of 11 players, leaving only 13 upperclassmen to occupy the rest of the places on the team. Of these 11 first-years, eight play offensive positions. With such a high number of youth in one area, it can help show how a team hasn’t been performing up to the expectations. A bad season or two is common, especially after such a spectacular season before.

“We need more experience in our players, we have a very young offense,” Corwin said. “Most mistakes are due to lack of experience. We cannot control that. We just have to deal with it.”

Though much can be said about lack of experience, a lot can be said about a team when you look at the leaders. Leadership is absolutely essential to having a successful team, regardless of the age of the players. “Some people are trying to lead,” Corwin said. “The rest of the team isn’t being very receptive to it. There’s not really a unified group of leaders at all times.” Without a strong leadership force, it’s not surprising to hear of the team’s struggles.

Regardless of it be youthfulness or lack of leadership, the team’s struggles have been noticed. With the season winding down, the biggest thing that can be done is working on team chemistry. Working on this takes time, though. Countless hours will be have to be spent both on and off the field together to build the bonds. However, there is still time to see progress in the team and things are looking up.

The Pirates continue their season on the 11th when they host the University of Dallas in a special game to help raise money for the Wounded Warrior Project. The following week, they host Centenary University in the last home game of the season. The season concludes April 25 and 26 as they travel to Colorado to face Colorado College and Whittier, respectively.

Previous Article
We Hear You: A Student’s Thoughts on the Administration’s Response to Recent Protests
Next Article
Softball Swings for the Fences